The Good, The Bad, The Weird 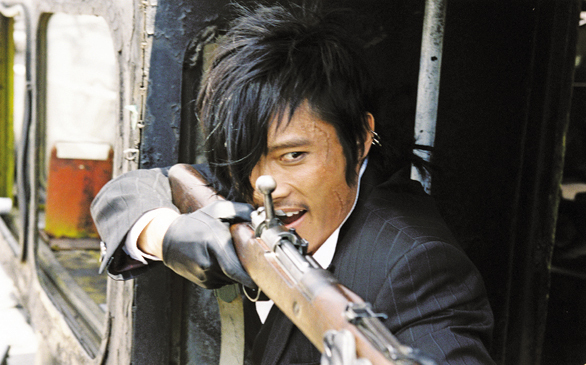 Lee Byung-hun as Chang-yi in The Good, The Bad, The Weird
(Credit: © CJ Entertainment, Inc.)

The Good is Do-won (bounty hunter, a Korean Dirty Harry), the Bad is Chang-yi (head honcho, raving psycho) and the Weird is Tae-goo (petty thief, murders if necessary). These three Korean exiles duke it out in a Chinese desert. If this all sounds a little bizarre, that’s because it is. But as everything roller coasts out of control, curiosity overwhelms and you just have to sit out the ride.

There is a map of buried treasure so fabled it is coveted by the highest (the Japanese army) to the lowest (the Asian desert bandits), with our three heroes sandwiched between. Rumors of the mystery cache spread fast, and as dreams of opulence grow, the urge to find the missing map overwhelm and a frantic blood lust fills the air. The final battle scenes stretch across the vast desert, and the dust settles over our three heroes as they find themselves face to face, with the buried treasure beneath their very feet.

The writer-director states that this is a story about three men who engage in a chase across Manchuria, and basically, that’s what it is. Unfortunately, the story is filled with so many other warring factions that, at times, it becomes confusing. If you’re not sure who’s axing whom to pieces, whom are you supposed to cheer for?

With so much else going on, we hardly get to know Do-won (Jung Woo-sung) and learn little more about Chang-yi (Lee Byung-hun), who, psychotic tendencies aside, could be a fun guy to hang out with. He has hair like Prince, always wears a smart three-piece pinstripe and turns down the offer of a free ride because “bandits don’t use tickets to get on trains, they stop them.” How cool is that? The only person we get to know is Tae-goo (Song Kang-ho), which makes it appear that it’s his story, but this is not the writer’s intent.

The final battle scenes are beautifully drawn, and, although there is great momentum, all those extra bodies present a difficulty of their own. When they disappear a few minutes later so that our three heroes can be alone, the silence is deafening. The filmmakers make a feeble attempt to justify their sudden absence, which simply doesn’t work, and as the payoff has a couple of great twists, there is an even bigger question why a more succinct story has not been told.

But there are some funny moments, as long as you can take your humor wrapped in blood and gore. And there’s plenty of action as we are lead through the chase by the Good, the Bad and the Weird, who manages to cheat us all. Well, nearly all…

The Good, The Bad, The Weird releases in select theaters April 30.