Needtobreathe: Comfortable on the Outside 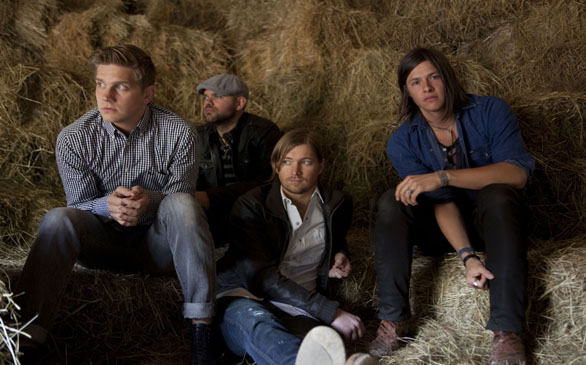 Needtobreathe originally hails from Possum Kingdom, a small town in South Carolina. Therefore, it’s no joke the band settled on calling its third album The Outsiders.

“Being from a small town and then signing to a label in New York, every time we were in New York or L.A. we felt like we were on the outside looking in. We never felt comfortable completely,” frontman Bear Rinehart explains. “Over the years, I think we’ve gotten more and more comfortable with the fact that our perspective was what was really valuable about us. I think the whole record is really about us coming to terms with not only being outsiders, but that that’s a good thing.”

One would never guess the feeling-like-outsiders thing judging from the music. The band, which also features Rinehart’s brother Bo on guitar, Seth Bolt on bass and Joe Stillwell on drums, has spent the last decade honing its blend of arena-tailored rock and folk/gospel. Not to mention its sincere lyrics are easily relatable.

“We try to write about things we know about. Maybe we don’t understand them in some ways, but we try to write the honest emotions. That’s something that we’ve found, regardless if people are going through the same situations as we are,” Rinehart says. “It’s mind blowing because we’re writing about fairly specific situations in our lives and the way those made us feel, but I think the human condition is very similar. I think people take those things, those emotions and those feelings, and translate them into whatever they’re going through.”

While Rinehart usually doesn’t go into songs with a certain idea, instead deferring to what the song should feel like, he does admit to using songwriting as a means of encouraging people to live life for all it’s worth.

“One of our things over the years has always been that even though you’ve been hurt in life, if you don’t try it again, if you never become vulnerable again, you’ll never experience love again. We feel like our music can help with, and hopefully, inspire some people to give it a try again.”

“We get fed up a lot with people selling themselves short in terms of life, in terms of their artistic input on the world and the things they enjoy and appreciate,” he continues. “How tired is everybody of bad reality shows and just bull music? There’s a lot of people that are doing it, and there’s a lot of people who aren’t. They don’t see what real beauty is and what real authenticity is, and we’re trying to encourage people to look for that.”

Meanwhile, the band wrote most of the album at its home studio, opting to incorporate a wider array of instruments with more of a Southern feel than it had explored in the past.

“Having your own place, you definitely feel the liberty to experiment with stuff. If we needed to take a few hours to learn how to play the mountain dulcimer so we could put it in a song, we would do it,” Rinehart points out. “When you listen to the record it does seem a little bit all over the place. I think that’s definitely what we were going for. We’ve learned over time that we can’t not be ourselves. It always comes across as sounding like us, regardless of what we do, so for us that’s encouraging and we can try anything we want.”

After years spent touring and grinding it out, the group has finally started seeing its hard work paying dividends amidst a newfound sense of self-discovery.

“We’ve been doing this for a long time, almost 11 years now, and it’s been a growing process. We feel like we get better every day. Maybe we’re slow learners but I think it’s taken us a long time to find our sound and find who we are,” Rinehart admits. “This record’s been really cool because I feel like we’ve found an audience at the same time we’ve found ourselves and our sound. We’ve made a record that feels comfortable to us, and we’ve found a crowd that’s into it.”

The Outsiders is currently available. Needtobreathe perform April 30 at the Glass House and May 1 at the El Rey. For more information, visit needtobreathe.net.