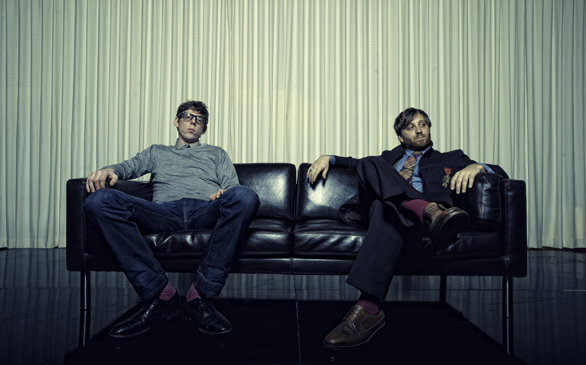 The new Black Keys album, dropping May 18, is called Brothers. Pre-orders are being taken now for an exciting deluxe edition of Brothers that includes a collectible 56-page hardbound book that features never-before-seen live photos and intimate backstage and studio shots. The deluxe set also includes the album on CD, a digital download of the album, a (possibly autographed) lithograph and instant delivery of MP3s of new songs “Tighten Up” and “New Girl.” The deluxe edition of Brothers is only available through the band’s Web site, theblackkeys.com.

After laying low for about six years, Glenn Danzig has a couple of projects that are about to put him back in the spotlight. First up is a personal appearance to promote his recently released lyrics book, Hidden Lyrics of the Left Hand. The book features select lyrics from his Danzig, Samhain and Misfits songs along with illustrations by Simon Bisley. Fans can get their copy autographed when they buy the book at the Golden Apple (7018 Melrose Ave., Hollywood; goldenapplecomics.com) when Danzig appears there May 2, beginning at 5 p.m. Then, a new Danzig album, to be called Deth Red Sabaoth, drops June 22 with an extensive global tour to follow.

Devon Clifford, drummer for Canadian band You Say Party! We Say Die! has died. Clifford collapsed on stage during the band’s concert at Vancouver’s Rickshaw Theatre April 16, fell into a coma and passed away April 18. Clifford’s family issued a statement saying that Devon died of a massive brain hemorrhage and that a surgery was performed to no avail. YSPWSD was scheduled to spend all of May and part of June on tour in Europe to promote their recent album, XXXX. Devon Clifford was 30 years old.

Keith Elam (better known as Guru), the MC half of hip-hop act Gang Starr, has passed away. Guru had a heart attack and surgery about a month ago, but he had kept hidden the fact that he was also suffering from cancer.

Guru’s producer, Solar, issued a statement saying, “Guru had been battling cancer for well over a year and has lost his battle. This is a matter that Guru wanted private until he could beat it, but tragically this did not happen. The cancer took him and now the world has lost a great man and a true genius.”

Besides his work with Gang Starr, Guru was also acclaimed for his series of Jazzmatazz releases. Guru died April 19 at the age of 43.

Talib Kweli and Hi-Tek have reunited for a new album called Revolutions Per Minute. Due May 18 from Warner Bros., Kweli says the album title refers not only to the spinning of a record but also to how today’s culture gets quick blasts of information in YouTube-sized sound bites. All 10 Bon Jovi studio albums are releasing in Special Editions May 11; each features new artwork and liner notes and includes era-specific bonus live tracks. Singer-songwriter Martin Sexton has released a new album called Sugarcoating on Kitchen Table Records, and he’ll be presenting the new material live at the Hollywood House of Blues May 8. The Besnard Lakes are the Roaring Night is the latest release from the Besnard Lakes. The band says the album is about loyalty, dishonor, love and hatred all seen through the eyes of two spies. The band plans a very intriguing show May 13 at the Troubadour. The Winter Sounds have left their college town hangout in Athens, Ga., long enough to play a handful of national dates including a May 2 stop at the Viper Room; their latest album is the eerily titled Church of the Haunted South. Reggae superstars Toots & the Maytals have a new album called Flip & Twist, and a limited edition version comes with a Toots stash box and a joint-shaped USB drive loaded with the music. Toots & the Maytals play the Key Club May 16. Download the new Tim Fite album, Under the Table Tennis, for free on May 18 at timfite.com.