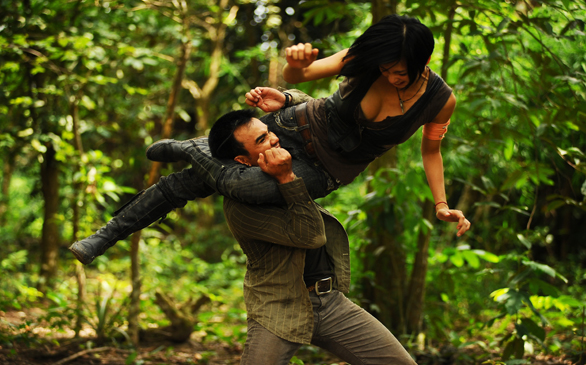 It’s no secret that I love film festivals. Big, small, local, internationaClashl: There is something particularly unifying about watching a collection of films with a community of like-minded cineastes, or people who have yet to lose their fascination with and adoration for movies.

One of the best things about film festivals is that no one there judges you for spending an entire day in the theater. They don’t care if you have neglected the gym a week or that you are going for your second round of popcorn and soda or that you spend the lunch break scribbling on the program guide to determine your own personal schedule for the fest. No one cares because they’re in the same boat.

More than anything, these are my people. I’ve even made some contacts. They’re acquaintances. Well, we are more like friends who only see each other when that time of year rolls around and we are set loose, allowed to wander from screening room to screening room like kids on Easter morning, excited with each egg that is a gem of a film we have found first. It really begins to feel like only we know about the dramas and comedies – but mainly dramas – that make up the event we call a film festival, which I have dubbed a neo-resurrection of cinema.

I get carried away, but I think that everyone should attend one film fest at least once in life. With so many being put together in Los Angeles alone, there are few excuses not to give it a try. As a precursor to the Cannes Film Festival, which takes place every May in the south of France, the Los Angeles Asian Pacific Film Festival is being held much closer to home and has an impressive lineup of films and events for your viewing pleasure. Sponsored by the Directors Guild of America, films are being screened at landmark theaters across the city, including Laemmle’s Sunset 5 and Downtown Independent.

Over the past 26 years, the festival has shown over 3,200 films and videos by Asian-American and Asian International artists. Since 1983, the event has built up and improved its list of films. This year there are 36 features and 134 shorts to be showcased over the 10 days.

I know you’re thinking that this is a lot, maybe too much to try to sort through. I know 170 films can seem like an impossible number from which to choose just a select few. Coincidentally, it is my passion in life to organize festival schedules. I live for this stuff. So allow me to highlight a few of the screenings and events that have caught my eye and that may tickle your fancy as well.

To start, appropriately, at the beginning, Au Revoir Taipei, which was a hit at the Berlin Film Festival, opens LAAPFF on April 29 with the filmmaker and cast scheduled to attend the L.A. premiere. This film isn’t typical of most fest pieces because, as opposed to most entrants that are hyper-dramatic drags, it is a refreshing, lighthearted romantic comedy.

Clash is Vietnam’s current box office smash hit that is set to be the International Centerpiece premiering May 2 at the DGA. It is an action-packed thriller that exemplifies the contemporary Viet Wave Cinema with its stylistic action scenes and thoughtful camera work. Director Le Thanh Son and cast members are also going to be on hand at the L.A. premiere.

Hong Kong is closing the festival with the blockbuster Bodyguards and Assassins. Another action film in the festival, it was directed by Teddy Chen and features big names like Tony Leung, Simon Yam and kickboxer Cung Le.

But of all the events, there are two that cannot be missed. In celebration of icon Bruce Lee’s 70th birthday, organizers have put together several days dedicated to his influence to the film industry. On April 30, Koreatown hosts an outdoor screening of the classic The Chinese Connection. Potentially his most famous work, Enter the Dragon is screening May 1 followed by a special discussion with filmmakers Brett Ratner and Reginald Hudlin, actor Bob Wall and Linkin Park's Joseph Hahn. The following day, the Lee family and friends are also set to participate in a panel about the legend.

Novice or veteran, film festivals are fun regardless, especially when organizers have scheduled numerous action-adventures and comedies that keep you energized for the entire ride.