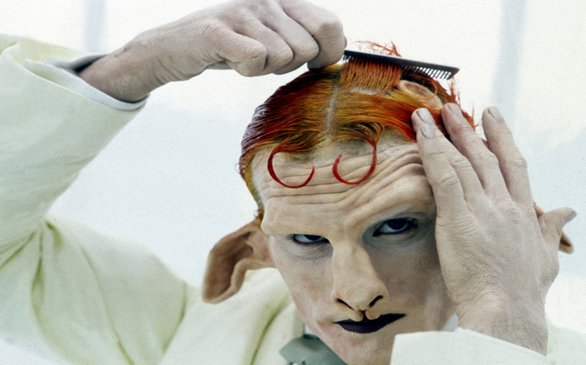 The Loughton Candidate from Cremaster 4 by Matthew Barney

Films to some are merely entertainment. Just a way to kill a couple hours between dropping their little kids off at school and picking up indigestion pills to calm the fire in their stomachs from eating unhealthy food that shouldn’t even be fed to the homeless. To many other people, they are more than just entertainment, they are an important art form that provides an escape that is on par with any vice they might have.

And then there are people like me. To people like me, film is everything. It’s the world. It’s love. It’s life. It’s a lens through which we see the world, and the language from which we communicate to the cosmos. Film is the ultimate art form. It combines elements that are industries in and of themselves (photography, music, etc.) to create the ultimate canvas. And it’s people like me that are the most capable of appreciating any and all forms of film.

Now, if you’re wondering where I’m going with this tangent, I’m getting there, so chill out. Several years back when I was living in New York, my aunt came to visit my mother and I, and she took us to an art house cinema to see something called The Cremaster Cycle. My aunt explained to me that The Cremaster Cycle was a series of five films directed by Matthew Barney, an American sculptor/photographer/filmmaker. As we were on our way to see the first two films in the series, my aunt told me that what I was about to see weren’t your ordinary films, but she wasn’t too sure how to accurately describe them, either. All I knew going in was I was about to see an art film that wasn’t conventional.

What I saw blew my mind. When I found out that the films were not available on DVD or any other media form, and that the only way you can see these films is by being lucky enough to have Barney screen the films in your city, I went and saw all of them. The best way I can describe them is this: The Cremaster Cycle is the epitome of alternative cinema. Barney brings the sensibilities and aesthetic of a sculptor or painter to film, which is why the series feels like the film equivalent of an exhibit in a museum.

There’s a story, but it’s not a conventional A to B story like we find in mainstream movies. In Cremaster 1, you have a troupe of synchronized dancers forming shapes on a football field while a blimp hovers above, and inside the blimp a woman dressed in crazy clothes plays with grapes that form the same shapes as the dancers down on the field. See what I’m talking about? Not the norm.

Cremaster 4 opens with two men on motorcycles racing in opposite directions on a road in the countryside while their testicles slide out of their pants and down their legs, which is intercut with a man dressed in a lamb costume tap dancing on a pier.

Cremaster 3 sees Matthew Barney himself dressed in white body paint with a crushed car part jammed in his mouth scale the walls of the Guggenheim museum. The title is taken from the “cremaster muscle,” which is the muscle in a dude’s scrotum that pulls his balls closer to his body when it’s cold and lowers them when it’s warm.

This is definitely Barney’s unique vision, but another thing I love about it is that there could be profound meaning to all of it or there could be no meaning. If there is a story, it’s just as much yours to create as it is Barney’s to share with the world.

What’s for sure is it’s not for everyone. In order to sit through and appreciate these films, you have to have a very deep appreciation for film and an even deeper appreciation for art in general. If you think you’re one of those people and you live in Los Angeles, you’re in luck. The Cremaster Cycle is screening at the Nuart Landmark Theatre starting June 11 for one week. If you’re up to the challenge and are open to having a cinematic experience like no other, then attend you must. But if you’re one of those people that only likes manipulative, pandering, crappy, dog shit movies that only serve to further harm the already sad intellectual state of America, then you can take a hike and go eat some “douchebag nachos.”