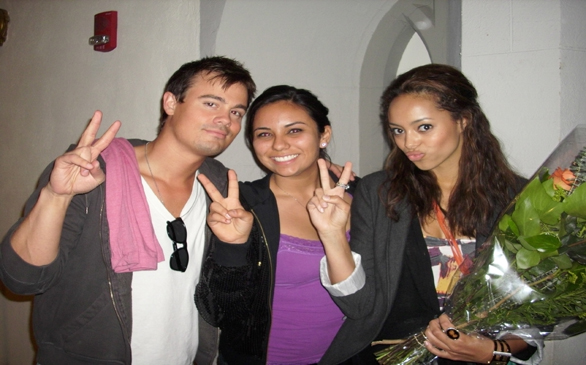 Called a “multi-house Greek party” by some, USC’s Bovard Auditorium hosted the annual Songfest on April 16. Fraternities and sororities paired up to compete in this year’s theme, “As Seen on TV.” Many performances featured a mash up of Top 40 hits that were reworded to keep a USC theme, which essentially meant that skits were tailored around the famed USC–UCLA rivalry (“Oh no, the evil Bruins have stolen Tommy Trojan’s sword! We must get it back!’ – insert song and dance here – ‘Yay! We got it back!’ – cue “We’re all in this together.” – End.).

Thoroughly entertaining, it looked like all 600 students had a blast. As the finale of Songfest came to a ringing end, Alpha Phi and Alpha Gamma Omega claimed the coveted Tommy Trojan Trophy as the winners of Songfest’s 57th program.

The celebrity guest judges were then acknowledged, including on-screen Greeks themselves, Amber Stevens and Gregory Michael of ABC Family’s “Greek.”

Michael felt it was just like the show: “When I was watching, I was like ‘omg, there’s a real version of this.’”

In the downtime since season three’s end, Michael and Stevens have been enjoying their time off, but keeping busy all the same. Stevens is helping a friend design a special line of jewelry called “Beso Beso” and has also become a self-proclaimed foodie, going to restaurants and recording her experiences.

“Yeah, she takes pictures of her food and then writes about it,” contributes Michael.

For fans of the show, the chemistry between the cast is real, as both Michael and Stevens claim that they all hang out quite often.

Both have other projects in the works, but there have been rumors circulating that Stevens has been cast in an upcoming Tyler Perry movie.

Campus Circle got to the bottom of it: “I don’t even know how that started,” she says. “I wish it were true, but it’s not.”