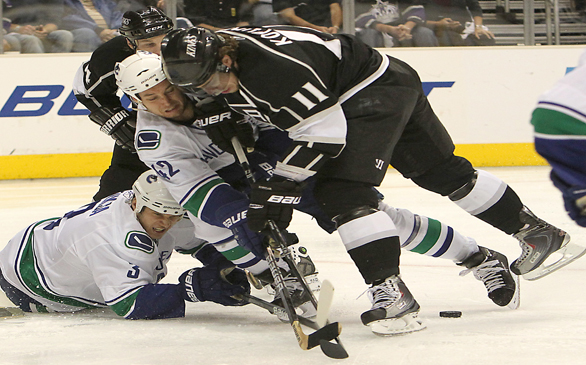 Kings center Anze Kopitar struggles to get off a shot against the Canucks.
(Credit: Robert Gauthier/Los Angeles Times/MCT)

Well, that was short. The Los Angeles Kings skated at Staples Center last weekend hoping their record-setting regular season would translate into a memorable Stanley Cup Playoff run. Instead, the Kings’ 2010 postseason came to a whimpering end with a three-game losing streak.

Hey, it was fun while it lasted. Let us now just hope Kings’ management does not screw it all up and break apart a bright and promising future for ice hockey in Los Angeles.

Until recently, it was the Anaheim Ducks who ruled the ice hockey landscape in Southern California. While the Kings were in the area decades before the Ducks were even thought of as a Disney movie (let alone a legitimate professional sports franchise), it was Anaheim who became the first-ever NHL team to deliver a Stanley Cup to the Pacific Time Zone.

Even more, the Ducks were taken rather seriously as a hockey franchise since their first Stanley Cup appearance in 2003, which is much more than the Kings could say. Sure, Los Angeles brought in Wayne Gretzky, which then arguably opened the door for the possibility of entertaining the idea of an NHL franchise in Anaheim. But still, the Kings have for the most part just been, well, there. In a city that boasts multiple championships and an overall tradition of winning in several other sports, somehow the Kings just never caught on.

That being said, this current batch of Kings may buck that trend, despite its first-round loss to the Vancouver Canucks. In fact, the team is one star player away from being a Stanley Cup team, especially if it holds onto Anze Kopitar, Joe Johnson, Drew Doughty, Jonathan Quick and Wayne Simmonds, among others.

I recommend trading Alexander Frolov for that veteran star to complement the amazing youth Los Angeles already has in place. If the Kings can do that, then the Ducks will have some company for quite some time.