A Nightmare on Elm Street: One, Two, Freddy’s Coming For You 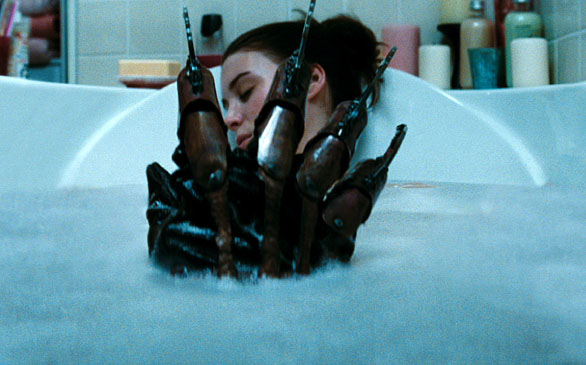 Rooney Mara as Nancy in A Nightmare on Elm Street
(Credit: Courtesy of New Line Cinema)

It’s finally here: the re-imagining of A Nightmare on Elm Street. This time the story is the same, but the way it is told is a bit different.

Immediately we are faced with a kid who has been up for hours. Tormented by his dreams and facing what is sure to be his 100th cup of coffee, he nods off – and in comes Freddy. Right off the bat, the audience is gripped with horror as the helpless sleepwalker faces his fate in a very gruesome manner.

Taking on the task of re-booting a classic pop icon is a task not everyone is cut out for, but when producers approached Academy Award nominee Jackie Earle Haley, his reaction was overwhelming.

“It’s such an amazing, iconic character,” Haley says. “It was just an absolute honor to be offered the role of Freddy.”

The producers wanted to make sure that they didn’t copy the old mold from the previous series, but create a new Freddy.

“Jackie embodied everything that we wanted for this role. The fans were aware of him, and he’s a brilliant actor. We knew that we wanted to make a seriously scary movie, and it would be impossible to tell this story without an actor of Jackie’s caliber,” explains Brad Fuller, executive producer.

With the addition of Haley as Freddy, it seemed that this movie would be unstoppable in its reach to scare moviegoers all over again, but it’s the makeup that provides the finishing touch. Pulling away from the character-driven face that Robert Englund wore for so many years, this incarnation is a new breed for Elm Street.

The face of Freddy, as animated as always, has been turned into that of a real monstrous burn victim. No lips, a sloping nose, rounded eye sockets and charred flesh give way to a face that has little room for the previous charismatic expressions that Freddy was known for. In its place is an evil that resonates with you long after leaving the theater.

The makeup took six hours to complete and then Haley had to do at least eight hours on set. According to Haley, sitting in the chair getting the makeup applied helped him understand Freddy’s motivations better.

In addition to the physical makeup, patches of green were added to Freddy’s face.

“We incorporated some digital green paint to Freddy’s cheeks that allowed Method, the visual effects company, the ability to create depth that could not be done with prosthetics alone,” explains executive producer, Mike Drake.

But it’s not Freddy’s face that makes him the icon for all of horror film eternity. It’s his weapon of choice. The glove with four crudely welded blades is the signature of this franchise. Without giving away any of the film, this time the glove is a derivative of who Freddy was before he caught fire and burned into our dreams. Using a gardening glove as the base, four razor-sharp blades are welded onto the back of the hand.

“Knowing that this is a glove that Krueger would have made, I made each individual piece hand cut and jagged, so that it looks like it was done in a garage,” special effects department rigger and welder Joe Mack informs.

The infamous glove seems to get almost as much screen time as Krueger himself. There are some excellent shots of the blades dragging along the steel pipes in the nightmare world with sparks flying.

“The guys did a great job on the glove,” says Haley. “There were a lot of times on set where I had to be very careful not to get it too close to the other actors, or fall on it!”

A real blade, making Freddy look like a burn victim from hell and a deeper back-story give way to a new take on the classic horror franchise. There will be a sequel, but make sure you catch this one to truly understand why Freddy will be coming back for more once this nightmare is over.

A Nightmare on Elm Street releases in theaters April 30.