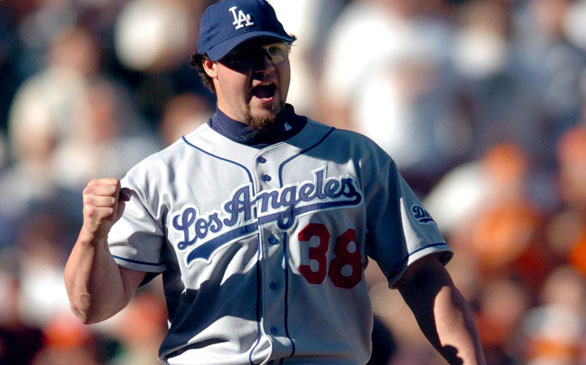 The year is 1995. A young immigrant crosses the border to attend a college he hears has a strong baseball program. His most cherished dream is to pitch in the major leagues. The young lad struggles to make his way in this foreign land barely speaking the language. At the age of 21, an injury to his throwing arm threatens to squash his big league dreams. He has to undergo surgery that few fully recover from to replace a ligament in his arm. And yet, through diligence and hard work the kid makes his way first through the minor league system and finally, to the big show as a starting pitcher. He has moderate success but disappoints his grandest hopes. So they try him out in the bullpen and whammo! Greatness is discovered. As if touched by magic, he becomes practically unbeatable and thrills a great American metropolis with a performance beyond his wildest dreams.

So go the first few chapters in the improbable rise of French-Canadian pitching sensation Eric Gagne and the explosive effect he had in Los Angeles. For those who can remember turn-of-the-millennium Los Angeles, it was a dark time. Our beloved baseball team, the LA Dodgers, was under the dominion of shadowy Rupert Murdoch and his evil empire, News Corp. Murdoch loved baseball so much that he came to see his team play exactly once in the eight years he owned the club. I suppose he was too busy selling war to the American people on his TV station, Fox. Under his dubious leadership, the organization floundered. Despite the best efforts of skipper Jim Tracy, the Dodgers never even earned a playoff berth. There was precious little to get excited about in those days.

Then came Gagne. Sporting an inch-long goatee and a wicked grin, the slightly rotund French Canadian started doing something remarkable out of the bullpen. What started as a mild curiosity soon became a sensation. The kid was practically unhittable. Between the years of 2001 and 2003, Gagne saved an astonishing 145 games for the Dodgers, including a record-smashing streak of 84 consecutive saves. To appreciate the greatness of this record one must only consider that the second-place record holder is 30 saves behind. Gagne’s streak is in the category of Joe DiMaggio’s 56 consecutive games with a base hit. Many believe that neither record will ever be broken.

Meanwhile Dodger fans went nuts. The stadium would literally shake to its foundations whenever Gagne was called out to save another game in the ninth inning. Guns N’ Roses’ “Welcome to the Jungle” would blast over the PA system and thousands of fans would headbang to the beat while Gagne raced in from left field to take his position on the mound. Alas, I was among those multitudes, and it chills me to recall the exhilaration in the air. There has never been anything quite like it. Those moments sustained us through the dark night of the News Corp. years.

So now Eric Gagne is retiring. After an unsuccessful attempt to revive his career with the Dodgers, he was finally given the hook. Oh, I know, officially he requested his release after being assigned to the minors. But one can guess that the Dodgers were not too pleased with his 20.25 ERA in spring training and didn’t care to have another has-been taking up locker space.

Media reports of Gagne’s retirement have inevitably remarked on the pitcher’s fall from grace. How he was among the 108 players mentioned in the Mitchell Report for using performance enhancers. How his own performance on the mound declined drastically. One of these stories appeared recently in the pages of Campus Circle from my esteemed colleague Parimal Rohit, a.k.a. the Sports Wanderer.

Mr. Rohit writes, “May his story of skyrocketed success and equally gargantuan fall be a moral story to all future athletes [who would] bend the rules in the name of trying to become the best.”

The problem with this sentiment is that there are many players who not only thrived after the public embarrassment of being named in the Mitchell Report but continue to be celebrated. Witness Manny Ramirez, A-Rod, David Ortiz, to name a few. Rohit also fails to mention that Gagne endured serious injuries requiring more surgery and contributing to his struggles on the mound. Simply to focus on Gagne’s inevitable decline (All players must retire at some point.) is to dismiss his remarkable achievements. Gagne may be gone, but what he meant to Dodger fans lives on – evidenced by the vast preponderance of jerseys worn by fans still bearing his name. Eric Gagne now returns to a wife and four young kids to begin a new, more important game.