First Round Rumbles On 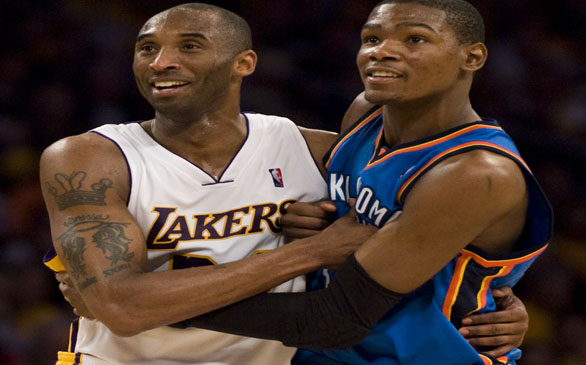 After silencing the Oklahoma City Thunder during Game 1 and 2 of the first round of the Western Conference playoffs in Los Angeles last week, the Lakers lost their fire and suffered two crushing defeats at the Ford Center.

The reigning champion Lakers jumped to a quick lead early in Game 3 Thursday night despite the roaring crowd in attendance, but Thunder superstar Kevin Durant sprang to life, especially on defense. For the final 12 minutes, he did a stellar job guarding Kobe Bryant (who did not have a single free-throw attempt in the entire game) and eventually led all scorers with 29 points while grabbing a career-high 19 rebounds for the 101-96 win.

The Lakers had a complete meltdown from the get-go of Game 4 Saturday night. They were outscored, outrebounded and basically outplayed by the younger, quicker squad, who nabbed a stunning 110-89 victory.

The Lakers need to get aggressive, resulting in more free-throw attempts, and get focused on both sides of the court if they’re going to win this series. Game 6 is Friday at Oklahoma City, and Game 7, if necessary, is Sunday at Staples.