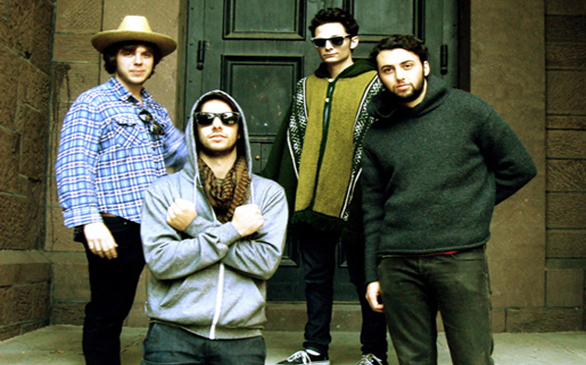 Slang Chickens have been churning out a steady stream of live performances around Los Angeles since forming two years ago; the tracklisting that’s finally been pressed onto a record is the setlist that’s been helping them build an audience since 2008, and to some extent this works against the band’s favor. The live energy of the band, an amplified version of their cowpunk, electric blues and local rock blend, does not translate as well as hoped on these studio recordings, the production clean and Evan Weiss’ vocals only emphasized as some awkwardly nasal hybrid of Yosemite Sam and JP Hasson (former Pleaseeasaur).

“Club Love” has a good rhythm to it that’s cheapened with too much electric fuzz, “Let’s Microwave” – though an apparent live favorite – is filler, raucous for the sake of being so, and somewhat of an argument against the idea that a song can be great despite its lyrics. “Blues (Dripping Down My Leg)” is a heavy blues track that breaks down unexpectedly into a Latin bridge and then bounces back; “Parasited Out” is a quickly paced pop song that sounds rather reminiscent of the Soft Pack (who, perhaps coincidentally, have a song called “Parasite”). No two songs here are alike, and while there is no confusion of identity, the record is not consistently rough with their live presence. Slang Chickens could, however, make an excellent case for a live record. Step two.