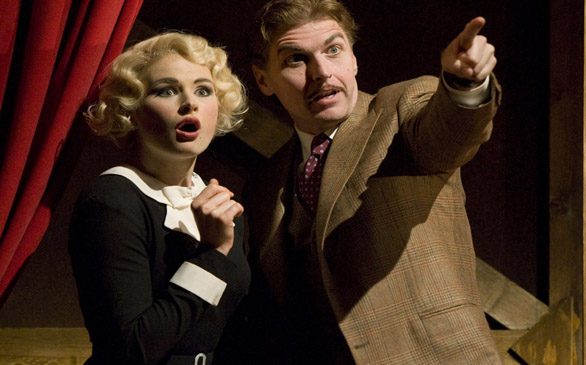 I’m not one for hyperbole, but “The 39 Steps” is one of the best plays I have seen in my life. After three-and-a-half years of theatergoing in Los Angeles and over 10 in New York, it’ been a long time since I have laughed this much or been as consistently entertained.

The scene is set in London, 1935, and Richard Hannay, age 37, has just returned home from Canada. He is bored, all of his friends have left the country and so he goes looking for some excitement … at the theater! During Mr. Memory’s performance, a shot goes off, and Annabella Schmidt, the woman who fired, runs to Hannay for help. He takes her back to his flat, where she is murdered during the night. But not before she reveals to Hannay her mission to bust a spy ring and prevent top-secret information from leaving the country. Fearing he would be blamed for murder, he takes off to get to the bottom of it all.

Of course, the plot is predictable, but it’s the execution that is ingenious and brilliant. Only four actors play a multitude of roles. Often times they play two people on stage at once! Then, with minimal set design, the actors use props and physical comedy to make the production feel more grandiose. For example, they open doors, only to start making wild gestures as if it’s windy, when, obviously, there is no wind. Or Hannay looks out the window, and as he does, two men in trench coats and hats run out onto the stage holding a lamp post, and when he looks away, they run off stage – only to be repeated a handful of times.

The dialogue is witty, absurd and silly, and the characters that each of the four actors are asked to play are hilarious, from a professor with the tip of his pinky cut off to a Russian bride enslaved by her old farmer husband.

This is theater for the young. At just two hours (intermission included), you have to see this one to believe that theater could be so fun!