“The Arsonists”: Now-May 23 @ The Odyssey Theatre 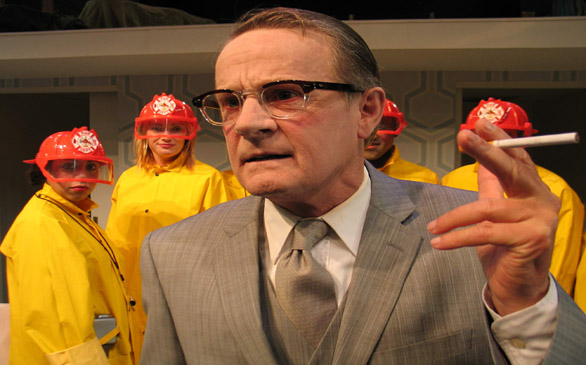 It starts like this: Gottlieb Biedermann is center stage lighting a cigarette. He is surrounded by a chorus of men and women in bright yellow firefighter coats, galoshes and red helmets that blow out the cigarette each times he goes to light it. The firefighters are looking out for him.

“The Arsonists,” by Swiss writer Max Frisch and translated by Britain’s Alistair Beaton, is a parody about “accommodating the very thing that will destroy you.” In this case, Biedermann, played by Norbert Weisser, invites two arsonists, Eisenring (Ron Bottitta) and Schmitz (John Achorn) into his home as guests in hopes that they will not burn it down. He must keep his hysterical wife Babette (Beth Hogan) as calm as possible to not provoke her heart condition, while yelling in German to his maid Anna (Diana Cignoni).

The acting is rich and hearty. Every one of the actors has tremendous focus and clarity of conviction. Not once do they lose that energy. One of my favorite moments in the show revolves around Schmitz eating. At one point, Anna rolls out a cart with a tray of food that includes bread and butter, tomato, pickles, sausage and wine. Schmitz asks for mustard to put on his sausage. He drowns the sausage in yellow mustard and proceeds to devour it. He loves his mustard! My stomach was turning; it was fascinating to watch him eat that, and everything else set before him. All I could think about was his terrible indigestion. It is so magnificent to witness an actor throw himself completely into his role.

When both arsonists Schmitz and Eisenring are together, it’s scary … really scary. They are pros at what they do, ex-convicts, and there is no bargaining with them.

The two level set design from the wallpaper to the hanging houses was beautifully developed by Danish set designer and fine artist Birgitte Moos. (I could not expect less from a student of Achim Freyer.) Other elements like fire and water were wonderfully incorporated in the show. Director Ron Sossi created something quite special.