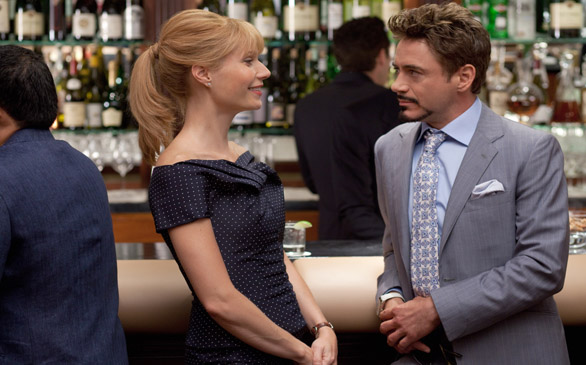 What do you get when you take a relatively inexperienced director, a recovering train wreck of an actor and an under-the-radar superhero?

$585 million at the box office, glowing reviews, a career renaissance and a highly anticipated sequel, that’s what.

In 2008, when the first Iron Man film headed into theaters, few expected it to create such a tidal wave of success. After all, it wasn’t Superman or Spider-Man or even The Incredible Hulk, and it was directed by a guy best known for the indie cred of writing and starring in Swingers. Two years later, after the stellar performance of the first film, hottest commodity on the block, Robert Downey Jr., who plays Tony Stark/Iron Man, and director Jon Favreau are decidedly anxious about the expectations of Iron Man 2.

At a press conference promoting the film, Downey Jr. scoffs when a journalist asks if he feels pressure about the release of the sequel.

“I’ve never done a sequel before,” Favreau begins earnestly, “unless you count me [having less than five lines] on Batman Forever. For me, there wasn’t the same pressure that you’re used to feeling, especially coming up with smaller movies, where you’re throwing a party and you don’t know if people are going to show up. Here, we knew people were going to show up, we just wanted to make sure everybody had a good time and this was going to be as fun, or more fun, than the last party.”

With a solid returning core cast including Downey Jr. and Gwyneth Paltrow as Pepper Potts, there were new invitees to the hoedown, including Don Cheadle’s well-publicized replacement of Terrence Howard as James Rhodes, a move everyone on the production insists is without drama or continued fallout, and Mickey Rourke as Ivan Vanko/Whiplash.

Favreau says he met Rourke at the Four Seasons in Beverly Hills after concocting a version of the character that reminded him of Viggo Mortensen in Eastern Promises.

“Whiplash in the comic book is a guy wearing tights with a big purple feather coming out of the top of his head. That wasn’t what we wanted,” Favreau laughs.

He says he needed an actor who would stand out in a sea of new characters without “a tremendous amount of screen time … could make an impression, and you’re going to feel like [Tony Stark] is in trouble. Mickey brought a lot of intensity. [After Sin City’s] Marv and The Wrestler, between the fanboys and the independent film community, [Mickey’s] back with a vengeance.”

Another new addition is screenwriter Justin Theroux, who co-wrote Tropic Thunder, a film so brilliantly conceived, Downey Jr. was nominated for an Oscar for his role as “a dude playing a dude disguised as another dude.” Favreau largely credits the rapport Theroux and Downey Jr. built on the set of that film with the success of Iron Man 2’s script, which was only Theroux’s second screenwriting gig to date.

“I never met anyone with a better work ethic, who could bring inspiration to each scene,” Favreau gushes. “To jump onboard a franchise, it was probably the sharpest learning curve for Justin and he really did a fantastic job.”

Although he isn’t new to the series, Favreau’s character, Happy Hogan, Tony Stark’s chauffeur and assistant, has a greatly expanded role in the sequel. But it isn’t just his role that was expanding during filming, according to Downey Jr. It was his waistline.

“There’s three Happy Hogans in the movie,” the actor begins, grinning wickedly. “There’s the Jon Favreau who was in excellent shape, boxing every day, and made it into the ring for the scene where he gets his ass handed to him by Scarlett [Johansson]. Then, midway, he’s struggling with a Medifast, but occasionally binging on pizza and saying, ‘This is crazy, I gotta get back to the gym.’ By the time we were doing reshoots, they were framing him out of shots,” he hoots. “Here’s the thing though—”

“Oh! Here we go,” Favreau interjects, laughing. “Now the nice [stuff]. Kiss me on the cheek after you’re done with me. Throw me a dollar and a towel.”

Iron Man 2 releases in theaters May 7.