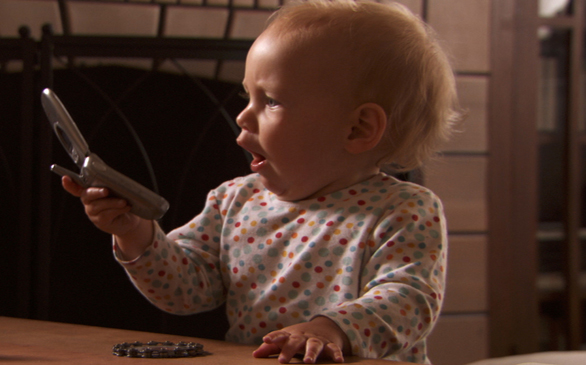 Hattie is one of four children followed in Babies.
(Credit: Courtesy of Focus Features)

When I first walked into the theater, I was a little apprehensive about seeing a film without spoken narration. A film simply following four babies from birth to their first year of life, without any commentary and only music interspersed throughout. Does that sound ominous and a little frightening to you?

Well, this film was nothing but exciting and refreshing. You are able to see such unique experiences that only babies, no matter what their race and culture, go through. The film follows four babies: Ponijao from Namibia, Bayarjargal from Mongolia, Mari from Tokyo, Japan and Hattie from the United States. Each child comes from a vastly different culture, yet are so similar. They all have such a curious nature, from picking up everything and wanting to put it in their mouths, to interacting with other babies and learning to crawl before walking.

We live in a society where we fear germs and dirt and rush to pick our children up off of the floor. Yet Ponijao in Namibia literally sits on dirt in his village all day while playing and learning. You see the frustration when a child wants to figure something out and can’t seem to quite get it. It’s truly amazing how they all learn to say “mama and dada” with such gusto.

You see the dynamics between siblings when a new child enters into the family fold with Bayarjargal in Mongolia. His older brother casually taunts and gently teases him until he gets a little older. Only then do they start to get into things together.

Mari in Tokyo is thrown for a loop when she can’t quite grasp how a particular toy works, and you just sit there laughing aloud asking yourself, “Why is this so funny?”

Hattie in San Francisco, Calif. wants to leave a group-singing circle with her father and struggles to open the door. If only as adults we could do what we really wanted to!

This film took time to develop and come to life, just as it does for a newborn. The one common note you see throughout is the love that they are receiving from their families. These babies make you laugh and squirm in your seats as they try to teach you that they aren’t so fragile.

Babies releases in select theaters May 7.