The Decemberists: Band’s Indie Rock Rescues the Folky Past 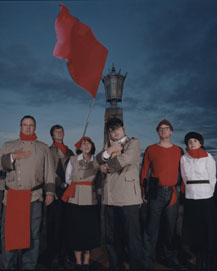 It’s not every modern songwriter whose lyrics allude to fops, mariners and magistrates. Ever rarer is one who seamlessly uses words like "purloined," "penitent" and "pantaloons" in a song.

But Colin Meloy isn’t much like his musical peers.

"There’s a misconception that I intend to send people to their dictionaries at every opportunity," says Meloy, 30, with a sigh. "It bums me out that it has become remarkable to use poetic words. A lot of beautiful words are getting lost."

Meloy isn’t just out to rescue them. He means to make a case for antique terms like "parapets," "corncobs" and "tamaracks" as part of a fresh and present language.

With his band, the Decemberists, Meloy has seized on some of the imagery, verbiage and musicality of old folk music. But, as Meloy explains, "this isn’t exactly The Chieftains."

In fact, the Decemberists’ rejiggered approach to folk has made them darlings of the indie-rock set. They’re most frequently compared to Belle & Sebastian, with whom they share an ironic style that, at first, sounds too precious to be believed.

Meloy says he has a surefire method to avoid stuffiness in his music. "(I) use toilet humor," he says. "It’s the Morrissey approach. He has this brilliant ability to mix a high-minded esthetic with the most sophomoric humor. I don’t think people recognize how viciously funny he is because they’ve lost their sense of irony."

You’ll need a healthy dose of that to appreciate the songs on the Decemberists’ newly released third album, Picaresque. Like its predecessors, it’s filled with allusions to rogues and prostitutes, sailors and kings. The music makes use of instruments as obscure as the shofar, the ancient religious horn of Judaism. While Meloy’s beautiful voice and fluid music can seem utterly earnest, the results aren’t so simple.

He developed his fanciful approach to character and language while studying creative writing at the University of Montana. Born in Helena, Mont., Meloy lived in the country and raised horses as a kid. His older sister, Malie Meloy, grew up to be a writer, too. She’s the author of the well-reviewed 2003 novel Liars and Saints.

Colin has also written prose, but realized he prefers music. After college, he fronted an alterna-country act called Tarkio. When it folded in 1999, he moved to Portland, where he began to find the like-minded musicians who would make up the Decemberists.

The band took its name from a group of young officers who, inspired by the French Revolution, launched an unsuccessful coup against the Russian government in December 1825. Of the 3,000 participants (known as Dekabristi, or Decembrists), five were hung and 120 exiled to Siberia. Meloy says he named his band the Decemberists (adding an extra "e") because "I like the sound of the name – and the melancholy of December."

The Decemberists’ first album, Castaways and Cutouts, released in 2002, was packed with songs about Spanish gypsies and Turkish prostitutes. It had no trouble standing out from the usual indie-rock whine.

The CD cover featured an ancient ship, emphasizing Meloy’s bent for writing updated sea shanties. "When I moved from the landlocked land of Montana to Oregon I started writing songs about oceans and sailors," Meloy explains. "There’s a real landscape there, full of stories."

The new album features an eight-minute seafaring suite, "The Mariner’s Revenge Song," which has a gruesomely dramatic story line.

Unsurprisingly, Meloy aspires to writing musical theater and even had talks with a Broadway producer about a play based on a prequel to "Peter Pan." While that project never got off the ground, Meloy hopes one day to write a musical based on the drawings of "outsider artist" Henry Darger. "Lots of commercial appeal there," he jokes.

The Decemberists got the chance to act out their new songs in the artwork for the booklet that accompanies the CD. They dressed as various characters from the songs in purposely amateurish tableaux.

"I wanted it to look as cheap as possible, since it’s a salute to community theater," Meloy explains. "I love the way community theater will use props from other shows, and casts girls in some men’s parts because more girls than boys participate. We’ve kept that tradition alive."

In his writing, Meloy works just as hard to sustain old archetypes. He’s obsessed with ghosts, barrow boys and chimney sweeps. "There’s not a lot of exposition needed with those characters," he explains. "Everyone has their idea of who these people were. So they’re universal.

"And when you think about it," he adds, "the tragedies of the chimney sweep aren’t really that different from those of a thirtysomething living in Chelsea – at least they’re not that different to me."