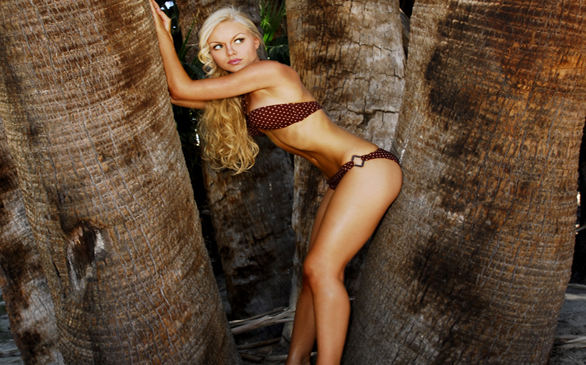 Being that Anya Monzikova stood next to briefcase No. 10 as a model on “Deal Or No Deal” and appears in the much-anticipated Iron Man 2, I had to get this model-slash-actress-not-the-other-way-around thing straight. It’s settled. She explains that she started off modeling, but now she just goes by actress.

It’s been a steady climb for the Russian-born starlet in Hollywood. Going from model to actress turned out to be a smooth transition for her. She lived in Miami and did a lot of commercial work. One day, she decided to try her luck with film.

“It just seemed like the natural progression, but [the auditions] are here in Los Angeles, so I had to move out here to study acting and audition.”Monzikova has endured her share of life struggles, which have only made her stronger and more determined.

“I lived with an 82-year-old grandma just to make ends meet,” she says. “I’d take care of her so I could have cheap rent. I’ve been homeless. It wasn’t so easy, but I think in the long run it’s all worth it.”

“Persistence wears down resistance” are words that she has heard and now keeps in the back of her mind whenever she needs a motivation boost.

Monzikova’s perseverance is exactly what landed her a part in Iron Man 2 (which, according to her, will not disappoint). She met with the casting director, did a little bit of improv, they called her back and she got the job. One of her most memorable and rewarding moments while on the set was when director Jon Favreau asked her to translate and help with the pronunciation of some dialogue for Scarlett Johansson.Though the details about Monzikova’s character, Rebekah, are hush-hush, she hopes to bring some excitement to the scene.

I ask her to describe her Iron Man 2 experience in one word. She answers with ease and with Tony Stark’s Iron Man bot-morphing quickness.She answers in Russian, what sounds to me like “Zamichyateljno.”