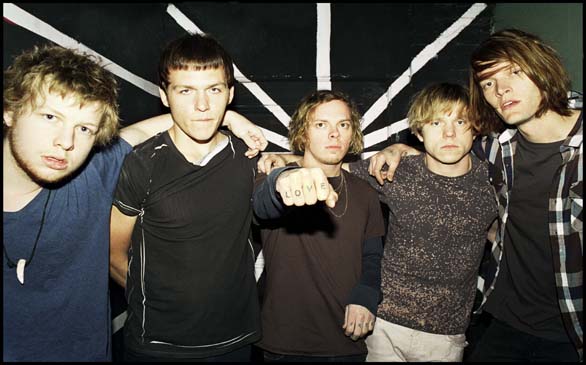 “I’m the type of person, like when I get into an elevator, I always think of the most socially unacceptable thing I can possibly do,” Matt Shultz says with a wicked grin. “I’ll see someone standing next to me, and I just want to lick their face and see what their reaction is. So whenever we’re onstage, I guess that part of my personality comes out.”

No truer words have been spoken by a band’s lead singer, one whose notorious live shows have been known to blow speakers, inspire stage-diving and even result in a few broken bones.

After releasing “Ain’t No Rest for the Wicked” from their 2009 self-titled debut album, Cage the Elephant soon erupted as a buzz band from last year’s Coachella Valley Music and Arts Festival. After seeing them onstage for the first time, I laid witness to what the buzz was all about. With the in-your-face pomp of Mick Jagger and the raw primal energy of an unleashed beast, Cage the Elephant delivers a show that would make even the Devil take notice.

“You’ll know when you’ve had a good show when you walk off stage and you don’t remember anything,” an industry friend once told Shultz.

“That’s how it’s been for awhile,” he says, “unless something goes terribly wrong.”

With an arsenal of music filled with lyrical stories that reach deep for five young lads from Bowling Green, Ky., brothers Matt and Brad Shultz form the roots of Cage the Elephant. After their parents divorced, “I kind of started sneaking records into the house,” says Shultz. “Music that we hadn’t previously been allowed to listen to.”

Together they grew up on heavy doses of Jimi Hendrix, Bob Dylan, the Stooges, the Rolling Stones and the Pixies. As a result, the band blends Brad Shultz and Lincoln Parish’s bluesy, hard-edged guitar riffs with Matt’s gritty vocals, then adds the funky bass and drum grooves of Daniel Tichenor and Jared Champion. Mix in a hefty slice of punk and a drop of Southern soul, and you’ve got yourself the sound of Cage the Elephant.

“We come from a small town so when we first started out, we just wanted to make a rock ’n’ roll record, to make music that we loved. We hadn’t been exposed to a whole lot [of music] at that point. We were just trying to make music as pure as we possibly could. What we viewed pure music to be,” says Shultz.

With their debut album winning rave reviews and their second single, “Back Against the Wall,” hitting No. 1 on Billboard’s Alternative Songs chart, Cage just dropped their third single, “In One Ear.” The music video for the song captures a bit of their frenzied live show, with a glimpse of singer Shultz’s onstage antics. Rumor has it that the bones broken at their show are usually his, and include his left foot, rib cage, pinky finger and to top it off, numerous stitches. Yet when speaking to the singer, he’s as polite and well-mannered as a Southern gentleman.

“Music is something to be shared; it’s not something you own,” he states. “It’s something that channels through you. Part of that sharing is through your live show. You should love that, you should be excited by that, and that should drive you.”

With Cage having played notable festivals like Lollapalooza, Bonnaroo, San Diego Street Scene, South by Southwest as well as touring Europe, the boys have been exposed to a wide variety of music well beyond their humble Kentucky beginnings. With their next album slated for late summer, Schultz gives an inside scoop of a few new influences.

“Screaming Tea Party, Sleeper Agent, Let’s Wrestle and Vivian Girls are new bands that I’m really into right now,” Shultz spills. “When you fall in love with all different types of music, that music becomes part of the music that you make. If you don’t love the music that you’re part of, you’re doing something wrong.”

Cage the Elephant is currently available. They perform June 12 at the Santa Barbara Bowl. For more information, visit cagetheelephant.com.