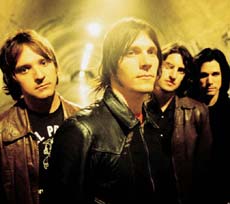 At five-thirty on a Friday night, three of the four members of Paloalto (bassist Tommy Black is MIA) are looking pretty haggard for a group of twentysomethings. This could be attributed to two reasons: first, the boys are winding down from a tour with Supergrass; and second, because their short history as a band has had more line-up changes and false starts to warrant coverage on "Behind The Music." But near the beginning of our interview, Paloalto's lead singer James Grundler says that he’s feeling less worn out than he appears. In fact, he’s very much at ease now, what with the release of the band’s second album, Heroes and Villains, just around the corner. "There's not a lot of expectation for us because the last record got kind of pushed under the rug," he attests.

The story behind Southern California's Paloalto is not necessarily a new one in the annals of music history, but it is an intriguing one because of the short time in which it occurred. After a lauded but forgotten debut album (2000’s Paloalto), founding band members Jason Johnson, Alex Parnell and Steve Clark left the group, leaving frontman and spokesman Grundler to carry on. Eventually, the line-up was rebuilt with Andy Blunda, Florian Reinert, and Black as his new bandmates, and it was at this time that Palo Alto got a break——a big break. Super-producer Rick Rubin (Red Hot Chili Peppers, Johnny Cash, Beastie Boys) received their demo, offered to produce their album, and signed them to his American Recordings label. Along with the talents of Rick Rubin have come the celebrity trappings, the almost automatic "NME" feature and a mention in "Vanity Fair." The signing has spurred a very fortunate turn of events that could prove a nice change of pace for a band that had been having a problem overcoming certain similarities to Radiohead and other British bands. After the storm of the last couple years, Paloalto is ready for some recognition.

But at this moment, as they prepare to make their sound check for their final show with Supergrass, the band is catatonic, having been touring non-stop in the UK and performing multiple shows in New York and Los Angeles. Luckily, after tonight they will get a bit of a rest before having to return to Britain where they will promote the release of the album. Despite his obvious weariness, Grundler overtakes the interview with his easygoing demeanor and a talent for selling his music; drummer Reinert and guitarist Blunda seem content to let him do the dirty work.

He believes he knows what went wrong with previous efforts, "The first record happened pretty fast, and the band didn't get a chance to grow as a unit," Grundler recalls. After playing in one previous band, trying out a solo stint, and then restructuring Paloalto for the past three years, Grundler appears to be satisfied with the current line-up. In Reinert, Blunda, and Black, he has found the proper ingredients for the brew he has so long envisioned. Once the band was set, their latest album was a rather arduous affair in its inception. "The eight months of demo work was most painstaking part of the process because that’s where all the ideas are worked through," he says. "Unfortunately we had a lot of time for that because of the demise of the label we were on."

With all the members coming from different approaches to music, ranging from humble to hilarious, their combination serves as an interesting palate from which to draw. Florian spent his early years in Germany wearing a uniform and a feathered cap in a local marching band. While Grundler asserts that he never really learned how to play anyone else's songs, Blunda, the soft-spoken guitarist, admits to more traditional beginnings, having grown up playing mostly classical piano.

One can tell from Grundler's answers to some stock questions about songwriting, producing and the such, that he could talk ad nauseum about what went into creating this latest album. Instead of being over-inflated, as most talk of something as abstract as someone else's creative process can be, he manages to be rather endearing. He seems genuinely interested in creating good music and staying true to his vision, especially concerning its originality and the possibility that there might not be an audience for it.

This illuminates what could be Paloalto's biggest obstacle; being American in America. While bands like Radiohead and Coldplay have made considerable strides in radio airplay and album sales in the States, Paloalto will have to overcome the fact that they are making what is believed to be British music. It is no coincidence that Britain has taking a liking to the band, having always been a nation that favors lush orchestration and sweeping melodies, but American audiences have proven harder to break.

No doubt, Paloalto has been told this before, and their perseverance should be applauded. Their album seems to get better with each listen; this is due in no small part to Rubin. As Grundler explains, Rubin's gifts lie in his ability to let each song take its own shape. "We really connected with Rick through songwriting because he really focuses on the song itself and doesn't rely on sonics or gimmicks to make something work," he says. Playing without abandon and able to leave the constraints of constructing the perfect song to the producer, Paloalto shows its true colors and proves to be quite a band. As Grundler notes, "With a record, you go and track it as freely as you can, but once it's done, it's captured and put in a box. Our live performances are supposed to be freer, a chance to experiment and expand what we didn't get to in the studio."

As they are young, talented, and eager, Paloalto need not let these things detract from their success, for they have time, and an album worth the trouble it took to make to help them become the band they so badly want to be.