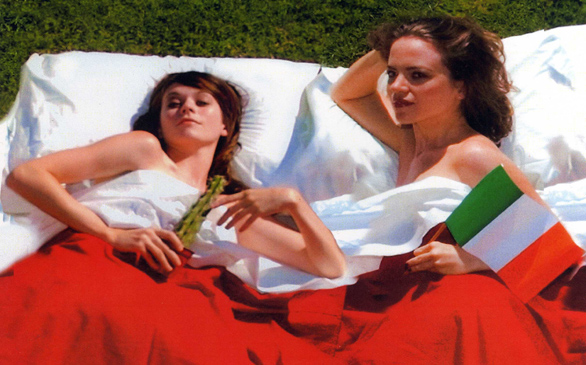 Pals since their school days, Alexandra Lydon and Laura Kindred decided to collect stories of bad decision-making at bedtime in Worst Laid Plans: When Bad Sex Happens to Good People. Come out May 8 at 10 p.m. ($8) to Upright Citizens Brigade Theatre for a book signing hosted by Alex and Laura, with performances by contributors like Casey Wilson ("SNL"). But first, sneak a peek between the sheets.

Laura: What does your mom think of Worst Laid Plans?

Alex: When I first told my mother about the book and asked her what she thought, she said, “It’s just sex Alex. What’s the big deal?” After reading parts of it the other night for the first time she said, “Oh my God. I can’t believe I told people to buy this!” As we speak she is probably trying to intercept the UPS truck that is delivering a copy she pre-ordered to be sent to my grandfather.

Laura: Meat Loaf famously sang, “I would do anything for love, but I won’t do that.” What is “that” for you?

Alex: I will NOT allow a man to wear his shoes in my apartment. It’s a “no shoe” policy. Shoes left at the door – because I don’t like to vacuum. So I guess I won’t vacuum for love either.

Alex: If you could sit down with one historical figure and hear his or her Worst Laid Plan, who would it be?

Laura: I’m going to have to go with Catherine the Great. I think we’d all like that one cleared up once and for all.

Alex: In the book Worst Laid Plans there are multiple “villains” – the people on the other side of the story, the people whose side may never be heard. Every story has at least one (except for the stories with threesomes, they have multiple). Do you have a favorite villain of Worst Laid Plans? The pot dealer with the penile implant? The cheating Italian tour guide who raps in Danish? The farting rapist?

Laura: Asking me that is like asking me to choose my favorite child. And the answer is the same: I dislike all of them. They’re selfish, grabby and they don’t know to hold in their farts. They do remind me to stock up on contraception. But they lack subtlety, and they ruined my vagina.

Laura: What was the best thing about working with me?

Alex: You are very easy going and non-judgmental. It’s very rare that you will put up an opposition to doing something or trying an idea. An example of this would be the five-minute dance breaks that I would require we take every so often. You always did. Even in those rare moments when I would insist it be to Linkin Park. You would start out rather reluctantly and then suddenly become violently enthusiastic, giving it your all with short yet aggressive movements of your arms and legs. It is a trademark of yours. That and your never-ending supply of white wife-beater tank tops.

Alex: And what was the best thing about working with me?

Laura: You are the perfect mix of Zen and monster truck. I’ve never met anyone who could be so deadline-oriented while surrounded by sage and wind chimes. You’ll make six aggressive phone calls on the way to yoga class, and chant affirmations on your way to the shooting range. I get distracted easily by shiny objects and butterflies, so without you, this book would just be a twinkle in some pervert’s eye. But we were a team, in work and life, bouncing ideas off each other. For example, you would always ask my opinion of the latest brown wrap dress you bought. And I would calmly explain that you already have five of that dress.

Laura: Is there one memory that sticks out from the process of writing the book?

Alex: We would often meet up and work at coffee shops throughout Los Angeles while compiling and editing. We saw things there. We heard things. Our eyes would at times wander and be gifted with the most unexpected and unique sight. Our ears would sometimes perk up and catch an unbelievable gem of a conversation. There was one time that a man dressed like Jesus (and I mean the full outfit and hair) inconspicuously came into the coffee shop, walked casually (and I must say in a way that was full of love) around and then sat directly across from us. No one in the coffee shop except for us seemed to acknowledge that Jesus was among us. He sat there while we worked, drinking his coffee and reading a newspaper while every now and then looking directly at us with compassionate (and slightly judging) eyes. Needless to say we found it difficult to continue what we were currently working on, which involved discussing the proper usage of the new term “dick nugget” and a good chapter for a story that involved a one-night stand with a little person.

Laura: And there was also the time we witnessed a man realize and then calmly and quickly accept the fact that he had herpes during a casual conversation with a friend.

Alex: Yes. We found it difficult to work during that as well.

Alex: Would you have sex with Alexandra Lydon?

Laura: Alex, cut it out. For the last time, I’m not going to have sex with you, even if you do have a slammin’ rack. I only said those things that time because I had too many dirty martinis and you looked so pretty in your brown wrap dress. Besides, I’m saving myself for marriage. And please give me back my underwear; I know you took it.

Alex: So you admit that you find me attractive?

Laura: If there is one thing you hope people could learn from Worst Laid Plans, what would it be?

Alex: Listen to your gut when it tells you something is wrong. Be wary of craigslist. Don’t drink. Stay in school. There are so many it is hard to choose. I think the biggest overall lesson I hope people could learn, something I am still trying to learn myself, is that everyone makes mistakes. We’re not perfect. The best thing you can do is to try to learn from your mistakes. And if that doesn’t work out for you, create a comedy show and book based off of them and make as much money as possible.

Alex: What was your favorite book as a kid?

Alex: In your story “Can’t Blow Me Love” you refer to yourself as being a part of the “dweebs among dweebs” of your high school and made it pretty clear that you had, oh I don’t know, emotional and psychological problems. What effect would you say that had on your psychosexual development?

Laura: I don’t particularly appreciate your implication that I have emotional and psychological baggage, and now I must go cut myself. But I will first answer your question because I am so sporting. I went to a fancy prep school but I was in remedial sex ed. When I got to college I told everyone I was taking a one-year vow of celibacy so no one would try to sleep with me … and pretended to take naps all the time so I didn’t have to talk to anyone … and watched Star Wars and Labyrinth every night … and told everyone I thought that “pube” was the perfect hybrid of the words “poop” and “boob.” I still think that’s true.

Laura: Pancakes or waffles? And I think you know what I’m REALLY talking about.

Alex: Pancakes. And I have no idea what you’re really talking about.