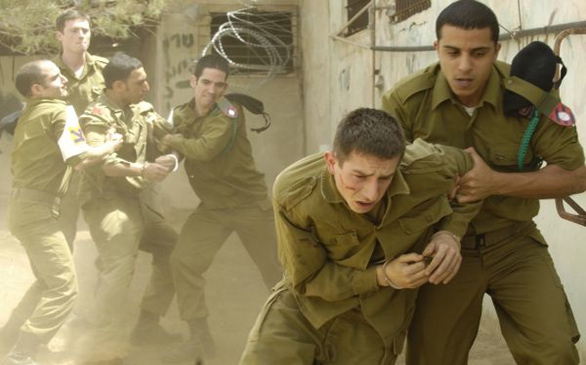 So here’s the premise: Herzl is shy behind his 340-pound frame and still lives with his mother. Because he is continuing to gain weight, he has recently been dropped by his weight-loss group and fired from his job. The only place that will hire him is a Japanese restaurant where he comes across the one profession whose criteria he fits – sumo wrestling. He joins up with three of his obese friends, and they embark on a training program that allows them to appreciate their bodies, for once, and brings them to the tender realization that love doesn’t come in one size.

The film is aptly titled A Matter of Size (2009) and is in Hebrew with English subtitles. What’s so different about this The Full Monty-type comedy? It is coming all the way from Israel to Los Angeles for its premiere at the opening night of the Fifth Annual Los Angeles Jewish Film Festival. Though it may be unknown to most American audiences, this film garnered three Israeli Oscars and six Audience Favorite Awards.

The opening night gala features a red carpet event with real sumo wrestlers in traditional attire. Award-winning Israeli filmmakers Erez Tadmor and Sharon Maymon are going to be in attendance for a Q&A after the film on May 8 at the Writer’s Guild Theater in Beverly Hills.

I know; you’re thinking, “Not another film festival. What’s so different about this one?” I’d like to begin by saying that every film festival is inherently different if not in organization, then assuredly in scope. There have been numerous fun, however frivolous, events discussed without so much of a word about the affect culture has played upon the film industry. Understandably, to an extent, movies are about escaping the tedium of everyday life for the fantastical.

If you’re looking for something a little deeper in Los Angeles, there are plenty of foreign and indie films that are available to the general public. Unfortunately, this city is also subjected to the most mundane of Hollywood cinema.

The L.A. Jewish Film Festival is an annual week in celebration of the diversity of the Jewish experience as expressed through film. The festival “seeks to promote tolerance and encourages dialogue within the Greater Los Angeles community” by featuring films that highlight Jewish culture and traditions. In other words, it’s bringing purpose onto the screen.

For six days, the fest screens a wide variety of features, documentary and student films in the L.A. area. Berlin ’36 sees its Los Angeles premiere May 9. The film, set in 1936, is about athlete Gretel Bergmann who fought for Olympic gold during the rise of Nazism.

For those of you who are struggling for ideas for your mother this Mother’s Day (which is May 9 if you have forgotten), the LAJFF has several tantalizing offers. Anita, an inspiring story of the progression and eventual triumph of a young Argentinean Jew, is playing that Sunday and would be the perfect show for mom.

The following day showcases the Los Angeles premiere of Bride Flight about the interconnectivity of four people who met on a flight in 1953 and who come together 55 years later to reminisce and reveal secrets that have been kept for 55 years. In addition to the film, Dave & Lil’s Boutique in Beverly Hills is hosting a pre-film event of wine, cheese and shopping – three things mothers and daughters can always agree on.

Closing night features “A Tribute to Israeli Cinema” at Laemmle’s Town Center. The American premiere of a film written and directed by Renen Schorr called The Loners (2009) is in both Hebrew and Russian with English subtitles. A human drama inspired by true events, The Loners focuses on two loner Russian soldiers who are sent to a horrific military prison where they rebel, demanding a fair and honorable military trial. Schorr is going to be on hand after the film for a Q&A with the audience.

This film festival, like many others, features some pretty incredible films. But with this one, you get a nice dose of culture and history like a cherry on top.