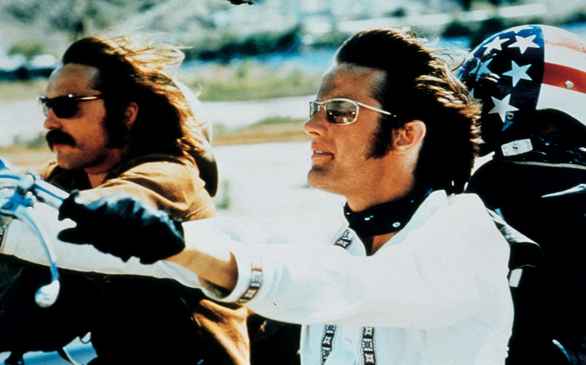 Easy Rider: one of the most significant films of the last century
(Credit: Sony Pictures Home Entertainment)

This week’s Screen Shots marks the 150th installment of the column. It was born out of my profound love of films and filmmaking, and to commemorate 150 I am talking about two of the most significant films of the last century and their impact on the film industry as a whole. Those two films are Easy Rider and Heaven’s Gate.

Do you ever wonder why some films are great and some are so astoundingly bad that it makes you feel like the devil is real and he’s molesting you? While there will always simply be good art and bad art, the evolution of the American film market has a lot to do with those two specific films, and I’ll explain why right after I finish off this pitcher of margaritas. (Glug-glug-glug-glug, gulp! Ahhh…)

OK, where was I? Ah yes, Easy Rider. Written by Dennis Hopper and Peter Fonda, produced by Fonda and directed by Hopper, Easy Rider is a brilliant and revolutionary film. Hopper and Fonda star as motorcycle-riding hippies who, after a successful drug deal, ride cross country on their bikes to attend Mardi Gras in New Orleans, and along the way take drugs, get arrested, hang out with hookers and … well … take more drugs.

The tightly controlled, studio-driven system of old Hollywood simply wasn’t interested in making films like this. But when Easy Rider came out in 1969 and became the first true independent film to be a huge massive hit, it was a big turning point for the movie business.

Easy Rider spoke to the youth of that generation and opened up the market for films aimed at young people. The suits at the studios suddenly realized that the filmmakers knew something they didn’t know and from there began what is referred to as “New Hollywood,” an era marked by creative control falling out of the studios hands and into the hands of the filmmakers. Heavily influenced by European new wave styles of making movies, directors like Martin Scorsese, Francis Ford Coppola, Steven Spielberg and Roman Polanski, to name a few, emerged to take part in the golden era of cinema that produced some of the best works in cinematic history, like Taxi Driver, The Godfather, Jaws and Chinatown.

Fast forward to 1980. Fresh off of winning multiple Academy Awards for his brilliant war film The Deer Hunter, director Michael Cimino’s next project, a western titled Heaven’s Gate, would be the next major turning point in the evolution of the film industry.

Set in Wyoming during the late 1800s, Kris Kristofferson stars as a man caught up in a clash between wealthy landowners and European immigrants. Heaven’s Gate became one of the most expensive films to date because of Cimino’s overindulgent approach to making it. All of the creative control that directors had earned over their films was decadently abused and resulted in the budget getting bigger and bigger every day of production.

Clocking in at three-and-a-half hours, the film was a huge flop and bankrupted the studio that financed it. It wasn’t that the actual film itself was bad; it was that its colossal failure symbolized the threat of the artist to the money. Suddenly, allowing a director to have complete creative control was too much of a financial risk and in the next couple of decades, the control over the films gradually shifted back into the hands of the studio and culminated into the depressing state that the film business exists in today.

Today, the business is dominated by fear; fear of risk, fear of originality and fear of artistic integrity. Not all, but the majority of most studio films are crafted by executives, marketing departments and focus groups for the purpose of churning out four-quadrant product that appeals to the highest common denominator.

Instead of ambitious, original visions, we get an endless of barrage of sequels, remakes, TV show adaptations and anything else that the studios feel is “low risk.” While not as expensive in their day, films like Taxi Driver, The Godfather and Chinatown would cost a lot more now because of inflation and, quite simply, wouldn’t be possible.

So what now? What does the future of cinema look like? Fortunately, I’m happy to say that I believe the future of cinema is bright. The golden era will cycle back around, and the next Easy Rider will emerge and usher in a new era of filmmaking where the true visionaries will take center stage again.

Now, if you’ll excuse me, I’m off to the theater to see Alvin and the Chipmunks 4: Kicked in the Nuts.