"The Dudesons in America": MTV dares to dream with four lunatic dudes. 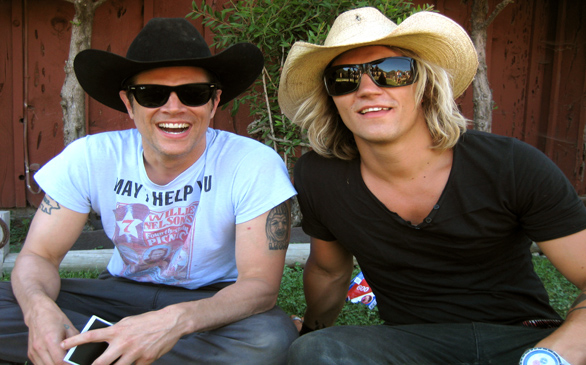 This breakneck show has set out to totally redefine the American Dream. No, I’m not talking about “The Hills.” All the way from the Arctic Circle, the Dudesons are making their way to MTV! Best friends since childhood, these four adventurous and deranged daredevils are testing the limits in their brand new American show, produced by “Jackass”’ Johnny Knoxville!

Jukka Hilden (the ringleader) and Jarppi Leppala (the funny one) describe the Dudesons’ show as Jackass meets Borat. It features the stunts of “Jackass” mixed with the situations that Borat finds himself in.

The Dudesons get into all sorts of laughable predicaments as they battle a multitude of cultural clashes here in the States. You can definitely expect wild stunts, and the Dudesons also have some hidden cameras and pranks up their sleeves. They have plans to not only become American astronauts, but be the first Finnish Native Americans.

Despite their comical approach to living out the American Dream, Hilden says, “We’re never making fun of Americans. We’re always making fun of ourselves.”

HP (Mr. Sensitive) and Jarno (the filmmaker) are the other two that make up this hilarious and insane quartet of friends.

Although they’re all lovable, there’s no doubt they’re crazy. They’ve tried to outrun a tiger, walked into a bullring on stilts and even branded “U.S.A.” on their butts.

Out of the nine episodes the Dudesons have filmed so far, they have already made five trips to the hospital. They’ve had broken backs, broken balls and a burned face.

So good in fact that for their most recent visit, they didn’t travel by ambulance, but by limousine

“I like the way Uncle Sam’s treating us at the moment,” says Hilden, despite the fact that he looked like Freddy Krueger for a week due to the third-degree burns on his face.

Leppala’s been sporting a back brace for the past 10 weeks, but he claims the guys are cautious to an extent because there’s a limit for everything and everyone.

“Even though we have ended up in the hospital quite a few times, we are each others’ best friends and we don’t want to see each other get hurt,” says Leppala.

With such ridiculousness, you can’t help but wonder how their families feel about their crazy adventures.

“You never call your mom and say, ‘OK mom, today I’m going to stand on the top of the building that we’re going to blow up,’” admits Hilden. “You tell her afterwards.”

Being TV stars is nothing new for the Dudesons. They’ve had their own show in Finland since 2001 and a wide fan base in Europe and Australia. This helped them snag their own show on Spike TV in 2006, which reached over 20 countries.

Now thanks to Johnny Knoxville and the entire “Jackass” crew, the new Fab Four are set to hit MTV. You can also catch them in the next Jackass movie, and it looks as if Knoxville will make an appearance on “The Dudesons in America.”

It doesn’t fit your stereotypical fairytale mold, but the Dudesons describe coming to America and working with Knoxville as a dream come true. The Dudesons see the U.S.A. as the land of opportunity. In Finland, they didn’t have as big of a budget as MTV is giving them and they are ecstatic about what the future holds.

“Now we’ve got more cars to crash, more buildings to blow up and more skin to burn,” says Hilden. “Our idea of the American Dream is to do more stupid crap than we did back home.”

While the guys do often find themselves in life-threatening situations, Leppala and Hilden feel that the extreme danger of the stunts isn’t the only thing that matters. Creativity is just as crucial.

“It’s not about going bigger and better always,” says Hilden. “It’s about having fun and enjoying the things you do, and that hopefully really shows on the screen.”