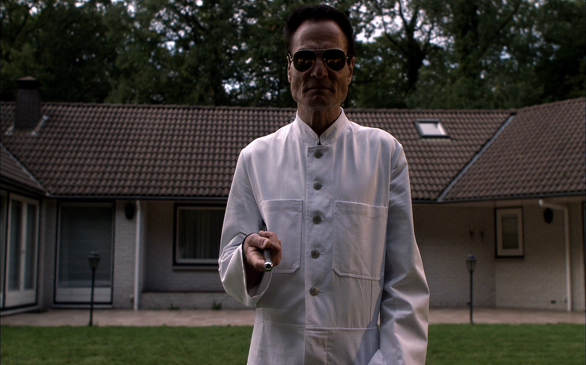 Dieter Laser as the sinister Dr. Heiter in The Human Centipede
(Credit: © 2009 sixentertainment)

The Human Centipede, helmed by first-time director Tom Six, has already garnered quite the reputation for itself. The Dutch film has caused much controversy due to its rather bizarre premise that is most certainly nothing like you have ever seen.

Two female American tourists fall trap to Dr. Heiter, an experimental doctor whose success lies in his ability to separate conjoined twins. This time around, however, his goal is a bit more sinister.

The film, which claims “100 percent medical accuracy,” follows the odd quest of Heiter to join three people together by joining their anuses and mouths, resulting in what would be the world’s first human centipede.

Sick? Maybe, but it’s definitely a unique cinematic occasion, for better or worse.

It’s certainly a novel approach to gross-out, graphic horror. The movie surprisingly doesn’t take you graphically as far as you might imagine, and this is, for the most part, a good thing. What starts as an intriguing logline plays out with more black humor than straight-up horror, but rest assured, the centipede plays out in detail.

Six certainly crafts the film with love for the genre, though the apparent low budget proves detrimental to the success of the film.

Those sick enough to make it out can rest assured that there is a sequel in the works, which promises to eclipse the original in terms of what sort of shenanigans Dr. Heiter has up his sleeve. Perhaps a 10-person centipede?

The film has cult status written all over it.

The Human Centipede releases in select theaters May 7.