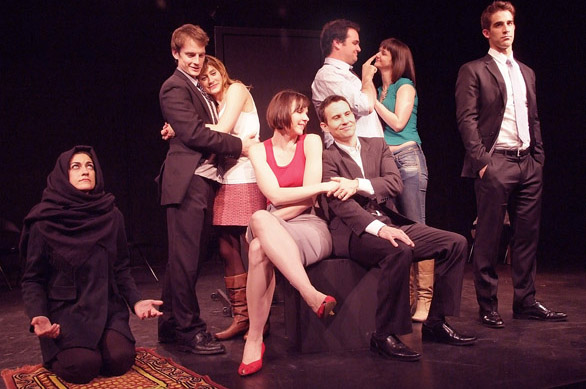 A few weeks ago a friend of mine asked if I had seen “Altar Ego,” the new comedy by the Katselas Theatre Company of the Beverly Hills Playhouse. He thought I would really enjoy it and urged me to check it out.

“There is something really special about this show,” he insisted.

So I went to see it, and what these talented actors gave me was rich, honest, vulnerable, no-bullshit performances. Theirs was some of the best acting I have seen in my five years living and seeing theater in Los Angeles.

Each of the characters struggles with his/her own issues – from sex addiction, monogamy, marriage, infidelity and relationships as a whole. One of my favorite characters was the Iranian woman, beautifully done by Leila Vatan (also a co-director along with Audrey Moore). She starts off by telling us lately she has been unpleasant to her friends and family. Irritable. She prays five times a day and still lives at home with her mother and father until the day she marries. She is desperate to get laid. Desperate. At this point she will take anything she can get, she would even welcome a “Jewish boy wrapped in bacon!”

There was also the gorgeous, flawed man with a tiny penis played passionately by Mike Horton, and Adam, the man anxious about proposing to his longtime girlfriend, played with great physicality by Alex Weed. Michelle Lawrence as Julie, a woman about to be proposed to when a new man suddenly offers a sexy temptation that forces her to question her comfortable and stable relationship, was absolutely wonderful.

The stage is bare with a traveling door that goes around to introduce each new character. All of the actors are on stage sitting, watching and struggling not to break into uncontrollable laughter. I laughed so hard my face hurt.

Finally, it is important I recognize the playwright, James Lyons, for his brilliant script. What made it so brilliant was that it spoke frankly and humorously about relationships, offering a fresh perspective. The characters and their struggles were so relatable, so real. I was completely blown away!