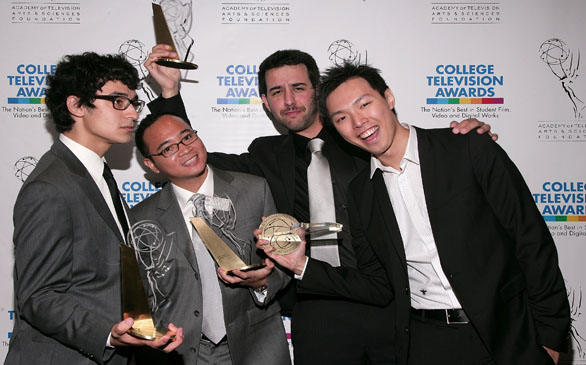 In their journeys of pursuing careers in the film industry, Romson Niega and Francis Pollara are quickly learning it’s always nice to get a head start. Given our country’s current state, the arts are an especially challenging field to break into. With their College Television Award for first place in Outstanding Commercial, Niega and Pollara’s futures appear promising. Niega and Pollara are two of the four members of their commercial “Trigger Happy”’s award-winning crew.

“Trigger Happy” is a commercial that promotes the Canon camera. The commercial is “playful, charismatic and fun,” according to Pollara. He describes the commercial as “a freeze motion playing game of tag with the product itself.” Niega and Pollara teamed up with Tom Lee and Saman Keshavarz on the Canon commercial to “Aim it. Shoot it. Freeze it.”

The Academy of Television Arts & Sciences Foundation held their 31st College Television Awards in April and awarded “Trigger Happy”’s crew with a $2, 000 prize as well as a meeting with the marketing head of ABC. The event was hosted by “Dancing with the Stars”’ Tom Bergeron. Television celebrities Ty Burrell, Hill Harper, Busy Philipps and many more presented the awards that evening.

This year, more than 600 students from 158 schools across 38 states entered the competition. “Entertainment Tonight”’s Kevin Frazier hosted a special screening of the winners’ work last month as well.

“Trigger Happy”’s crew walked away with a grant from Kodak, which they will invest in future projects and hands-on experience with professionals from ABC. Neither Niega or Pollara expected to win.

“I felt more of a camaraderie with my friends more than anything,” says Niega.

“Trigger Happy” has also been nominated for the CLIO Awards. The CLIO Awards have been around for over five decades and are the “Emmys” for the commercial industry. The winner will be determined at the awards ceremony in New York City May 26.

This isn’t the first project for this crew of four. Niega, Pollara, Keshavarz and Lee have collaborated on other commercials, narrative shorts and a music video, which won an award at South by Southwest last month in Austin, Texas.

It was all hands on deck to create “Trigger Happy.” Niega served as producer/director while Pollara was also a producer. Niega worked out the budgeting and logistic parts of the commercial. He gathered the crew and scheduled the production. He aimed to “make sure the director’s view is attainable with the humble budget.”

Pollara was in charge of basically everything that took place in front of the camera. He generated the group of set editors and camera crew. He served as the motivator and leader for the crew of students and professionals.

Niega and Pollara met during school at the Art Center College of Design. While Niega graduated last year, Pollara is still in school pursuing cinematography and plans to redirect towards production. He feels that production is more fit for him.

“I like the challenge of it and also the environment of it all,” he says.

Having a doctor and a scientist as parents, “it was difficult expressing to them this is what I want to do with my life,” says Pollara, adding, “As recognition is coming around, it’s becoming more accepted, which is very nice.”

Pollara is leaning more towards production now, but first fell in love with cinematography. When he got his first camera in high school, he soon decided this would be his path.

“I enjoyed the whole concept of the technical aspect of the camera capturing and creating a story with that. That was very interesting to me. I found a place for myself to make a difference. It felt good so I kept doing it,” he says.

Pollara and Niega were raised in the greater Los Angeles area and have known since a young age that they loved film.

Niega thanks his college experience for invaluable knowledge.

“The more and more I fell in love with the program, the more I wanted to pursue storytelling,” says Niega.

Pollara admits the unexpected nominations and wins have actually been a strain since he hadn’t planned out how time-consuming it would all be. However laborious though, “it’s been fun meeting everyone. The recognition is nice,” says Pollara.