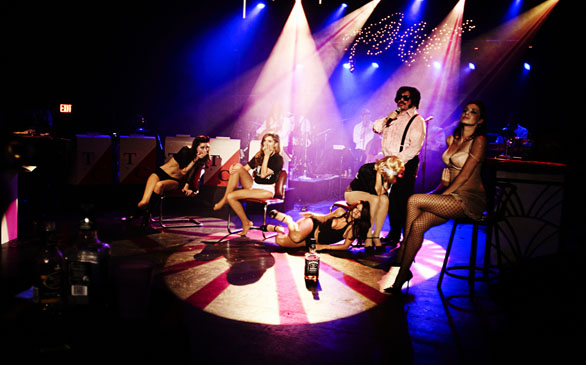 Tony Clifton returns to Los Angeles for four special engagements celebrating the 25th Anniversary of his performance at the Comedy Store. Get ready for broads, booze and brass!

Why now for a comeback?

Comeback my ass. I’m an international singing sensation and have never stopped working. Granted, it’s been primarily in Third World countries, but those subhuman peons need entertainment too. Besides, the legal age of consent is 14 … 15 years old in some of those countries. And I’ve always said you’re only as old as the chick you’re screwing.

How do you think modern audiences will react to a lounge singer?

I’ve been on tour in the States for the last year. Sold out shows at every stop. Average audience age: 23. Why? I give the audience what they want: SEX, SEX and more SEX. Count ’em. I have over a half a dozen of the youngest, hottest dancers. They’re called the Cliftonettes.

Besides that, I’ve got a kick-ass band that one reviewer said could hold their own with the Mothers of Invention and the E Street Band. Added to that is a screaming four-piece horn section from New Orleans. Like the Booze News said, “An explosion of mind-melting mayhem.”

Don’t get me wrong – I’ll still do a couple of Dino and Frank’s songs. After all, you got to pay respect to the Chairmen of the Board. But guys, you do not want to miss Madame Mystere – one of the top burlesque dancers in the nation – taking it off to Sinatra’s “Summer Wind.” We also do Zeppelin, Tom Petty, Marshall Tucker.

I’m a song and dance man and pussy hound, period. As for Bono, I actually do one of his songs. It’s called “Two Shots of Happy, One Shot of Sad.” Believe it or not, he wrote it for Frank, who never recorded it. Great song! I’m actually thinking of recording it with Bono himself.

Any chance of a new album?

Funny you asked. I’m working on one right now. Recording it at “Cliftonmere,” my own recording studio in the mountains of the Sierra Madres. It’s happening big time. It’s like Frank’s Duets Album. Everybody wanted to record with him; it’s the same with me. By the way, R.E.M. just jumped aboard the other day. Stay tuned.

So I hear you have a love/hate relationship with Gloria Allred? Do you guys go way back?

Oh, you mean the ambulance chaser. She gives lawyers a bad name (as if they don’t have one already). It reminds me of the joke: Two lawyers are walking down the street. They pass a hot chick. One turns to the other and says, “I’d like to fuck that.” The other lawyer says, “Outta what?”

How is Tony relevant to today’s young people compared to your generation?

Keep in mind my generation fought in World War II. We’re referred to as “the greatest generation.” I’m not a boomer. They really fucked it up for their kids. They were selfish and only took care of themselves. Their kids who come to my show were left holding the bag. I feel bad for them. That’s why I give them a night like no other to forget their troubles – broads, booze and brass.

The term you use so often is “broad.” Why do you like that word?

That is the word of my generation. Frank always used it, and it’s not disrespectful. As a matter of fact, Sinatra called Shirley MacLaine the greatest broad he ever met. She was the one broad that was a member of the Rat Pack. None of them ever touched her – not Frank, Dino or even Sammy.

Ever thought about doing a makeover? Like a new haircut or suit? Becoming contemporary?

Are you foolin’? I’m now considered retro. Stick around long enough and the pendulum swings the other way. And man, am I and my hot babes swingin’ … Come see us and you’ll know what I mean.