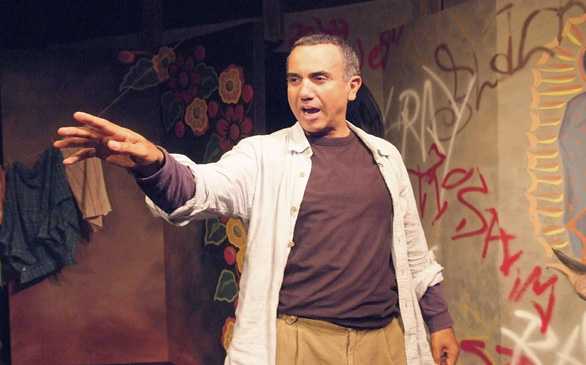 “The King of the Desert” is the first theatrical production by the CoActive Content, written by Artistic Director Stacey Martino. It follows the journey of a young Mexican-American boy into adulthood, growing up in the barrio and going after his dream.

Actor René Rivera performs all of the different characters on his own with great flow and liveliness. It is astounding the way in which he shifts effortlessly from one character to the next, keeping the dialogue going, switching back and forth from English to beautifully enunciated Spanish. His performance is so well done you forget about Mr. Rivera and become totally spellbound by each new character he brings to life.

In one of his opening stories, he talks about the first play he ever did when he was 6 years old. He played an avocado. He could remember his mother sitting in the audience looking proudly at him and his teacher’s enthusiasm. When the moment came for him to recite his only line (to the other actor who also happened to be the bully of the school), he totally forgot! The look on his mother and teacher’s faces turned to disappointment. After his performance, he goes backstage to take off his avocado costume, feeling extremely foreign and out of place in his dark skin among his light-skinned peers. He goes home to share his mortifying evening with his drunken father who shows no sympathy. He goes on to study at the Juilliard School and then performs on Broadway.

The performance is also a great testament to director Valentino Ferreira’s work.

“'The King of the Desert' grew out of my hunger to understand my husband’s life and to learn about my daughter’s Mexican-American heritage, “ explains playwright Stacey Martino. “It is a story that weaves together my version of my husband’s mythology, stories his family shared with me and a rich cultural lineage that deserves to be explored at this time in America.”

Ten percent of the proceeds from the run of the show will benefit the National Latino Children’s Institute headquartered in San Antonio, Texas.