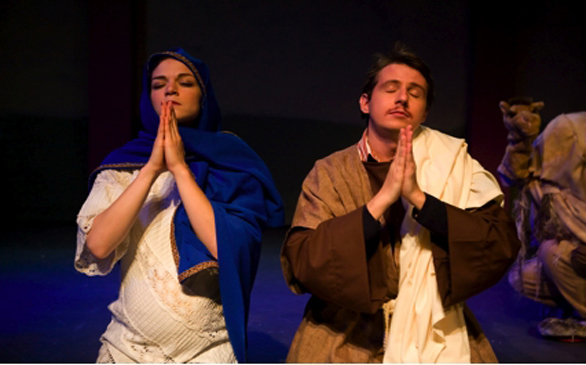 Diane Symonds and Gary Sullivan in “Sister Mary Ignatius Explains It All For You”
(Credit: Courtesy of Jonathan David Lewis)

“Sister Mary Ignatius Explains It All for You” is a satirical look at the complexities of Catholicism’s system of beliefs. This very amusing play is a lecture given by teaching nun Sister Mary Ignatius, played by the very talented and fearsome Joanna Churgin. That is until she is interrupted by four former students in the reunion to end all reunions.

Little Brighid Fleming who plays Thomas, the Sister’s student, was perfect – innocent as stuffed animals. The staging also does a cool trick near the end. The play, however, challenges a very old system of doing things: Catholicism. Durang does away with God by interrogating a horrible representative of the religion, the Sister, with all the major faith-based questions. A lot of people, perhaps Durang, are introduced to God and turn away from God because of a particular religion. And for Durang to try and answer all the big “God” questions using a skewed interpretation of Catholicism, even if it is within a comedic light, is tiresome.

The second one-act play, “The Actor’s Nightmare,” is like an exercise in all aspects of theater. The story/spoof is every actor’s worst nightmare; being on stage with no recollection of the lines. The play doesn’t unfold in the typical climactic action most theater follows, which is what makes it absurd. Instead, it is more of a theatrical showcase of talent, i.e., an ordinary man, George Spelvin played by Johnny Arena, finds himself trapped on stage during which a series of plays elicit his improvised participation. If Arena’s squirmy monologues don’t get a chuckle out of you, then perhaps you’ll enjoy the quirky Kat Primeau, who does an amazing job at playing the blind Pozzo in the “Waiting for Godot” portion.

[Author’s note: I am not Catholic.]

Comedy
Impractical Jokers aka The Tenderloins, Serving Comedy Up "Well Done": Live at The Grove of Anaheim (1/17)
4,663 views