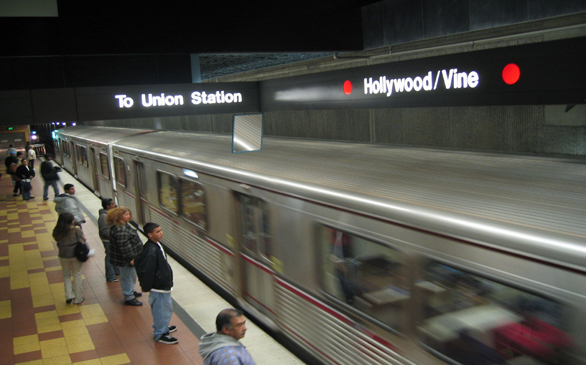 The subway is a godsend for the weary, for those without a car of their own to drive.
(Credit: Howard Shapiro/Philadelphia Inquirer/MCT )

The face of the man staring out the window as the subway car came to a stop would be my face staring out into a world beneath normal existence. Here, we are the real city-dwellers, forcibly confined to running around like rats in the sewers. The unwanted and dirty, in an attempt to make ends meet, toil to and fro by way of tax-paid privileges.

“All aboard!” says the faceless voice through the speakers, and we are off, screeching metallic bronze screaming as we race to the next round of workers to be transported to the outside world. It is only necessary that once inside, no contact is to be made. Take the seat where no one is sitting next to you, stay quiet and don’t draw attention to your misery. Many faces, mostly brown, stare straight ahead. Others choose to read, while many more would rather remain deaf to the already-silent subway car by their earphones.

The subway is a godsend for the weary, for those without a car of their own to drive. The city has furnished its citizens with a reliable (if not sometimes out of service) mode of transportation. At its center is the majesty of Union Station, collecting its gatherers in ventilated chambers, breathing oxygen to different parts of the capitalist’s body.

Everyone walks fast. The morning rush is no time for leisure; for there is no reason to dilly-dally while people all around you are scurrying to find their next exit. Be it the Gold Line to Pasadena, the Red Line to North Hollywood or the Blue Line to Long Beach. Every stop of these routes can be reached in minutes, even seconds, by a car on the freeway. Underground, the constant stop-and-go means an even longer commute.

There is no democracy on the subway. The route is predestined. Entrance into its system means giving up the right to stop wherever you please. In our independence over the road above, we are the masters of the vessel.

On the subway, we give up our authority and instead become listless. With the route already decided, there is nothing to do but to be distracted by your surroundings and the general hilarious propaganda of the metro posters and “do not graffiti” signs next to a scratched-in penis on the seat.

Read a book, text message and do anything but dare interact with fellow passengers. Social norms are strong in the subway car. Everyone is at least one seat away from another person, and it’s usually the case that some would rather ride the subway standing up then sit right next to somebody.

Others are non-conformers and social butterflies who break the silence with conversations no one wants to be involved in, because if talking on the subway is a social faux pas, then screaming just makes you damn crazy. The world knows to stay away.

The afternoons are more of a delight riding the train. Unlike the Red Line that takes everyone Downtown underneath the freeways, the Gold Line sits above the traffic, with views that range from Chinatown’s red pagoda-style roofs, crossing over the basin that holds the trickle of the L.A. River.

The Los Angeles sun is soft against the gigantic window view of the city’s landscape. Most of the kids are out of school, and they usually come in with a friend laughing and talking the whole ride home. Those who’ve lost their innocence stay quiet the whole way. The lucky ones are preoccupied with the lush visual sights of their cell phones. However, mine are the people-watching.

The trains run every day, making their rounds from dawn until midnight. In the subway, no one is pretending that everything is OK. I am a voyeur, a spy into a world that is partly tragic and insanely, awesomely real.

D-Day
A Meat-Eater and the Vegan Food Tour
3,188 views