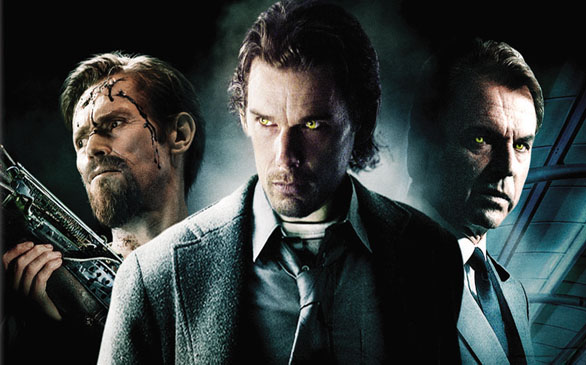 The end is near!

Among the analogs between now and the ’70s – economic crisis, pressure on oil supplies—is the prevalence of apocalyptic stories. Now the BBC cult favorite, Survivors: The Complete Original Series, as well as the first two seasons of the 2008 remake, comes to DVD. The series is set in a world devastated by a man-made virus, which has killed off most of the population. The survivors must band together to rebuild some semblance of life. Terry Nation, a veteran of many of Britain’s greatest shows, created the original series, while Adrian Hodges (“Primeval”) helmed the remake.

The apocalyptic plague of Daybreakers has turned most of the population into vampires. Now they’re running out of humans to feed on. Starving vampires are growing increasingly violent and desperate. Ethan Hawke is the hematologist looking for an alternative to human blood who stumbles on a vampire who has regained his humanity. Sam Neill (Where has he been?) and Willem Dafoe co-star in this stylish film.

Armand Assante stars in California Dreamin’, winner of the Un Certain Regard Award at Cannes. Set during the 1999 NATO bombing of Yugoslavia, it follows a Romanian railway official who stops a train carrying NATO supplies in the middle of nowhere. Funny and heartbreaking, the film shows the effects of war on the small village.

Airing in 1984, Freud is a six-part BBC miniseries detailing the father of psychoanalysis’s life. David Suchet (“Agatha Christie: Poirot”) plays the title role. Michael Pennington (“The Bill”) is Carl Jung and Michael Kitchen (“Foyle’s War”) is Ernst Von Fleischel-Marxow. It’s an engaging look at the professional and personal life of one of the most important thinkers in history.

Before he was one of the biggest movie stars in the world, Will Smith got his start as a West Philadelphia troublemaker sent to live with his wealthy aunt and uncle as “The Fresh Prince of Bel-Air.” In this fifth and penultimate season, Will gets married.

Dirty Dancing: Limited Keepsake Edition is a brand new two-disc release of the beloved coming-of-age story about a naïve girl (Jennifer Grey) who falls for the dance instructor (Patrick Swayze) at a summer resort. In addition to a remastered picture, this edition includes a hardcover book and an hour of new bonus features, including a tribute to the late Swayze.

Then go back to where it all began with the original series, Dragon Ball: Season Four. Goku takes on his most powerful foe yet in King Piccolo and avenges his best friend Krillin.

Jennifer Garner stars as a supernatural assassin in the comic-book adaptation Elektra. After being murdered, Elektra is brought back to life by a blind martial arts master (Terence Stamp) and trained in the deadly arts. She becomes a killer for hire. But when she’s given the assignment of a man and his daughter on the run from the crime syndicate known as the Hand, Elektra has to choose sides. This director’s cut includes commentary by director Rob Bowman, deleted scenes and a making-of featurette.