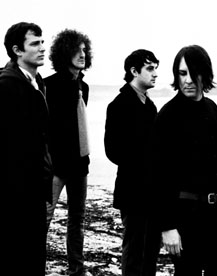 "We don’t pee in people’s shoes or anything."

We’re sitting in the plush, punked-out practice space of Los Angeles-based band Run Run Run. Joshua Polk, the band’s guitarist, smiles at his statement while an amused silence settles on his fellow bandmates, who observe the effects of such a declaration.

After proper prompting, the band then enthusiastically launches into the story of Mike Patton (of Mr. Bungle and formerly of Faith No More), who urinated into an audience member’s shoe, drank it and threw the shoe back into the audience. Lead singer and guitarist Xander Smith tells the tale with a perceptible glow in his eyes, ending with a laughing "We should probably break up because we can’t top that."

Run Run Run, comprised of both Smith and Polk, and completed by Jeramy Gritter on bass and Daniel Dod on drums, carry their love of storytelling over to the musical world as well.

"I like to describe our band as ‘nightmare rock,’" Dod says. "Our performances and what we project live with our energy and our lights and the fog and everything are like a really strange, weird dream. Maybe not necessarily one that [makes] you want to go away, but it’s uncomfortable."

Polk is quick to agree, saying, "Maybe we’re all comfortable with being uncomfortable."

That certainly seems to be the case because the band’s music incites paradoxical emotions that confuse the listener just enough to spark interest, but not enough to be completely off-putting.

Run Run Run’s melodies are flowing, yet disjointed. As Smith describes it, "The guitars are signature in that they’re really swirly and really dense and psychedelic and stuff – that’s very shoegazerish."

Smith’s calming and soothing vocals are often backed with driving rock guitars, a jazzy bassline and dense, insistent drumbeats. The tracks tend to have an ethereal quality to them, contrasting sharply with the darkness of the music itself.

This is most evident in the band’s latest release, Endless Winter E.P. The record includes an innovative and severely strung-out version of the melodic Mazzy Star song "Fade into You," and also features the standout track "2 a.m.," which somehow with its spacey music and dreamy vocals manages to inspire a perfect mental picture of late-night beauty and serenity. Endless Winter serves to demonstrate the band’s ability to incite that feeling of estrangement from all things worldly.

The musical paradox even extends to the stage. "We’re volatile people, you know," Smith says of the difference between their music and their live shows. "It’s an interesting juxtaposition because when you listen to our record it’s kind of dreamy and mellow. It’s not really music that you’d think would be played by this band."

During performances, the guys have their instruments turned up to a skin-tingling level. The band is unafraid to turn up the guitars and bass as loud as they will go, and they certainly won’t let a little ear-deafening, wall-vibrating sound keep them from a crazy light and fog show during their set.

"It comes off as really honest," Smith says. "Those elements are sort of exceptional elements that you don’t see in a lot of bands. They give us a sort of signature. They’re that way because we like it that way."

Dod agrees, saying, "We just like to create an atmosphere. Some bands will just show up and play their songs and just get off [the stage]. We want it to be almost like a little short film. You’re there and you’re going to see a show, and you’re going to walk away from it with something. … We want people to leave with something and not just be one of those bands where people are watching and then in 30 seconds they decide they don’t care. We want people to get stuck with us while we’re playing, basically."

Run Run Run, which started out as a side project of up to 11 members at a time has since buckled down and gotten serious about their music. The current members have settled in Los Angeles to devote themselves completely to their cause. They are united in their goals for the future of the band, and this desire has sparked a relationship among the quartet that is unmistakably intimate and a little bit quirky, giving rise to an inclination for witty banter.

"It’s basically like we’re, gay as it sounds, four boyfriends. We’re in a relationship with each other [and] that’s just how it is. We’re just around each other all the time," Dod says.

Smith adds, while pointing to Gritter and Dod, "The sex is rad, but fuckin’ I hate him ’cause he keeps leaving his toothbrush in a weird place and he’s always leaving the seat up."

With this new metaphor in mind, the members of the band laughingly spar, trying to top one another for the funniest complaint against the other "boyfriends." It’s easy to see exactly what kind of relationship the band members have with one another.

"He’ll never leave in the morning," Polk says, pointing to Gritter. "He’ll stay around until, like, noon, when I’m like, ‘OK, you need to leave. It’s time for lunch, and I have plans.’"

"I take off in the middle of the night [and] you don’t even notice," Dod retorts.

The members of Run Run Run, with their quirky antics and high ideals, have carved a name for themselves in the L.A. music scene playing with such bands as The Strokes, The Vines and even And You Will Know Us By the Trail of Dead. When asked what they ultimately wanted to accomplish with their music, the band quickly responds in their usual style.

"Everything that can possibly be accomplished," Polk says.

"And things that haven’t been accomplished in music yet. We want to go all the way," Dod adds.

A short pause later, Smith says with the smile of a 2-year-old, "I want to play on a riverboat."