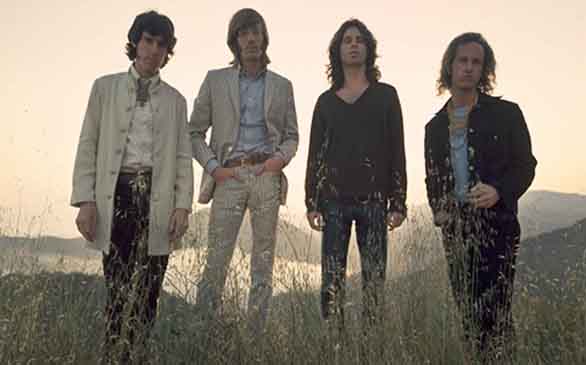 Jim Morrison, Janis Joplin and Jimi Hendrix: Three legendary artists who died within a year of each other, all at the age of 27, and whose passings brought an end to one of the most fertile, experimental times in America’s musical history. Pieces of their influential lives are now on display at the Grammy Museum at L.A. Live in an exhibit titled Strange Kozmic Experience that’s intensely illuminating and deeply resonant.

Walking in, you’re greeted by Joplin’s 1965 Porsche 356C Cabriolet, painted with a psychedelic landscape that swirls over mountains, into the night sky, and across skinless, disembodied faces and breasts. What else can you say but, “Trippy, man?”

The show is divided into a triptych – “Strange” for Morrison’s Strange Days, “Kozmic” for Joplin’s Kozmic Blues Band and Jimi Hendrix’s “Experience” – that begins with Morrison. Arriving at the upstairs gallery, iconic images of the Doors stretch across the wall. The photos, taken by Joel Brodsky, are some of the best known of the band, but, seeing them in person, they become luminously tangible.

The most striking and well-known image is one of Morrison titled “The American Poet.” Shirtless, with arms outstretched and ribs protruding, a steely, piercing gaze leveled at the camera, it has an undeniable crucifixion quality to it. The photo was used as artwork on the back of the Doors self-titled debut album and has graced millions of posters since.

Brodsky spoke about the 1967 photo session in an interview years later saying, “Morrison never really looked that way again, and those pictures have become a part of the Doors’ legend. I think I got him at his peak.”

Seeing that moment frozen in time, close enough that you notice details like a mole by Morrison’s nose, is thrilling, as are other artifacts in the gallery like a poster announcing the band’s appearance at the Sunset Strip’s Whisky a Go Go penned by hand, allegedly Morrison’s.

On a much more personal level, visitors are invited to read letters written by Joplin and addressed to her family. Dating from 1966 to 1970, they are amazingly revelatory and speak to the singer’s most personal side.

The first, sent on an ornately decorated paper you might expect to find on the desk of a Russian czar rather than in the hands of the whiskey-swilling soul singer, begins, “I managed to pass my – gasp – 27th birthday without really feeling it.”

Knowing that would be the last birthday Joplin celebrated, the rest of the letter carries an undeniably poignancy as well as clues to Joplin’s psychology. Considering the tumultuous relationship she had with her parents, especially her mother, when she writes, “After you reach a certain level of talent the deciding factor is ambition, or how much you really need, need to be loved ...,” you have to assume that was one of the main things driving her to success, especially when another reads, “I’m awfully sorry to be such a disappointment to you.”

By comparison, Jimi Hendrix, first seen in a photo juggling a joint and a cigarette, both in one hand, is an enigma. While Morrison and Joplin allowed their lives to be well documented in photos and video, Hendrix’s photos seem more like stolen moments than posed opportunities. Perhaps because he seems so elusive, the black-and-white images of him are incredibly compelling.

Moving into the archival side of the exhibit, a short video highlighting each musician plays on one side, while displayed on the other side are personal artifacts and important objects spanning their career.

Some of the many items on view include Morrison’s driver’s license, listing his address as 8721 Sunset Boulevard, and the cymbal John Densmore used for “Riders on the Storm.” For Joplin, who sang like no other woman had before and redefined the role of women in rock, you can check out things like her yearbook, the guitar she learned to play “Me and Bobby McGee” on and an American Express card that raises the bizarre question: Do you think Janis didn’t leave home without it?

For Hendrix, whose display includes footage of his rendition of “The Star-Spangled Banner” at Woodstock guaranteed to give you chills, you can read handwritten lyrics to an unfinished song as well as “Who Knows” and “Gypsy Eyes,” which many assume is about his mother, and see the American flag shirt he lost in a ping-pong match.

It’s a fascinating exhibit for old and new fans alike.