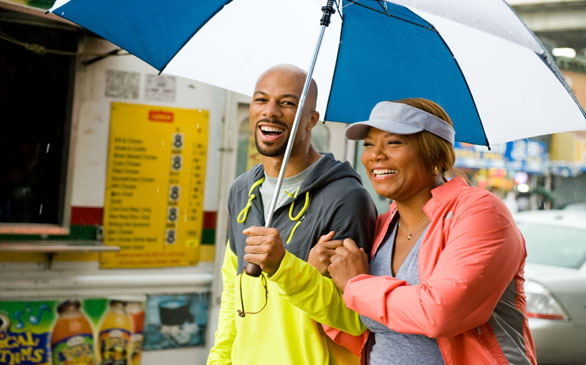 You gotta give it to Queen Latifah. She’s not Tinseltown’s typical leading love interest, and yet, she goes for it. Did you see how she caught the eye of LL Cool J in Last Holiday? Hmmm … it would seem Latifah has a thing for her fellow rappers. This time, she unintentionally finds herself falling for Common.

Latifah’s character, Leslie Wright, drives a hooptie, is a full-figured, fiercely independent woman, bought a fixer-upper and works her butt off as a physical therapist. Her cousin, Morgan Alexander (the traffic-stopping Paula Patton), is the exact opposite. She has made it her job to marry a pro baller. She’s gorgeous, wears dresses and brings binoculars to the ballgames so she can gawk at the section where the players’ wives sit and is staying with her cousin until she figures out what to do with her life.

Randomly, Leslie stumbles into Scott McKnight, star player of the New Jersey Nets, at a gas station. Taken aback by her sweet, ’round-the-way style, he invites her to a party at his house. Of course, Morgan is thrilled, and with complete predictability, Scott falls for Morgan the minute he sees her. Leslie takes a back seat to her cousin’s high-speed romance, until Scott suffers a career-halting injury. The pressure is too much for Morgan to handle as she imagines her glamorous life ending with his career. It’s Leslie, the kind-hearted physical therapist, who steps up – and in – to help. Everybody’s true colors show in times of adversity.

For Latifah, who not only stars in but produces the film with her production company Flavor Unit, this Cinderella story set against the backdrop of the NBA wasn’t too far-fetched.

“It’s art imitating life,” says Shakim Compere, Latifah’s longtime producing partner. “When you think about it, Latifah’s life has been a Cinderella story.”

“It wasn’t a stretch for me,” agrees the Grammy-winning rapper-singer and Oscar-nominated actress. “I definitely love basketball. And it’s about the fact that it’s not always what you look like, it’s who you are from the inside. Beauty from the inside out is one of the themes that I have been interested in throughout my career. A lot of that comes across in this movie, and it comes across with humor, with sexiness, with style – and with basketball. Being from New Jersey and getting to work with the NBA and the Nets made it even sweeter.”

It’s not just the Nets’ Bobby Simmons Jr. that Latifah gets to dribble over. Dwight Howard and Rashard Lewis (Orlando Magic), Dwyane Wade (Miami Heat) and Rajon Rondo (Boston Celtics) also make appearances. And though Common looks a tad out of place surrounded by the tall ballers, the Nets jersey seemed to suit the handsome emcee just fine.

“I knew I wanted to be a part of this movie,” says Common. “It’s about two of my favorite things, love and basketball.”

Plus, since his resume consists mostly of action flicks, like Wanted and Smokin’ Aces, Common had to go deeper and stretch higher for this role.

“I had emotional scenes,” he says. “I had to be funny and charming. I went from romantic scenes to basketball scenes. One of the most fulfilling moments was hitting that three-point shot against the Heat. The pressure was on for real. It was like a real game because everybody’s like, ‘Yo, you got to hit this shot.’ The crowd felt it, the team felt it and behind the cameras, the producers and the director were all saying, ‘Come on, hit this shot.’ That was very satisfying.”

For some, it might be hard to imagine Latifah and Common between the sheets. Well, get ready for steamy action. And considering Common is rumored to be dating Serena Williams; maybe Latifah isn’t such an unbelievable match.

“We all tried to always remain true to this being a romantic comedy, but we knew the sports aspect also had to be authentic and true for it to work,” says director Sanaa Hamri. “Everyone understood that without one element, we wouldn’t have the other. In the finished film, the basketball is hot and the romance is hot. I think we were able bring the best of both worlds to the screen.”

Just Wright releases in theaters May 14.