Robin Hood: Men in tights are a thing of the past. 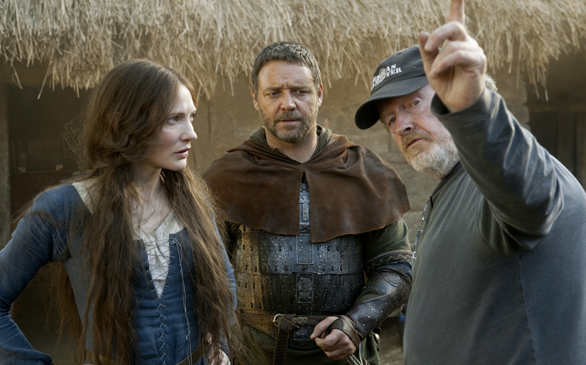 Say the words “Robin Hood” to anyone these days, and you’ll get one of two responses: “Ooh, I loved that cartoon when I was a kid,” or “My mom totally loves that Kevin Costner guy.” Well, all that’s about to change with the latest adaptation about the thieving dude and his Merry Men.

Russell Crowe steps into the title role. But his is a tough guy for a new generation. For Crowe, he wouldn’t have it any other way.

“I said I’d do Robin Hood, but only if it were a fresh take,” he says. “It is one of the longest-surviving stories in the English language. That requires due respect. I took the attitude that if you’re going to revitalize Robin Hood, it has to be done on the basis that whatever you thought you knew about the legend was an understandable mistake. It has to be different from what has come before.”

Part of that retooling comes from the storytellers picked to bring this tale to the big screen. Enter: Brian Grazer and Ridley Scott. Both have worked with the Academy Award-winning actor on A Beautiful Mind and Gladiator, respectively. Instead of setting their tale amid the flowery whimsy of medieval England, they chose to go with a more bleak and violent event: the Crusades. This way, Robin Hood’s fiery antics intertwines with history.

For those wondering with baited breath how this story of Robin’s origins differs from the others, here’s a taste of what to expect: Robin Longstride (a.k.a. Robin Hood) is an infantryman in the ranks of King Richard’s army as it returns from the Third Crusade in the Holy Land. Richard has been trying to reclaim a sizable fortune paid to the French king who held him hostage as he returned from his Crusade. As a result, he’s laying siege to a French castle. However, his luck runs out when he takes an arrow to the neck and dies. That’s when Prince John takes over.

Simultaneously, Robin heads back to his homeland to find that Richard’s reign has ruined the place. Not only that, but its new ruler is greedy, letting the people suffer while he takes their money. This doesn’t sit well with Robin. He gets a crew of fierce warriors and rises up against this injustice, leaving behind a massive body count.

Every good soldier has a fair lady to turn to for solace (and in this case, onscreen chemistry). However, in this film, passions are slow to ignite, as Crowe explains.

“The Marion relationship has certain Shakespearean elements to it. It’s very much The Taming of the Shrew. Robin and Marion don’t get on at all when they first meet, but there is a latent kindness to both these people. They are similar creatures who have been looking for some sign of that intuitive kindness in other people all their lives.”

Academy Award-winning actress Cate Blanchett steps in as the Lady Marion, a revamped version of the sweet and elegant Maid Marion. Scott was proud to have the stunning star join his cast.

“Cate Blanchett has a very definitive part in this overall story and context,” he says. “It’s a perfect – if you like – marriage of two characters.”

“Because Russell and Ridley have such a long history together of making films that go straight to the heart of the matter, it was a very exciting combination for me,” she explains.

Other favorites from past versions return with a new face and vigor as well. The evil Sheriff of Nottingham is played by Matthew Macfadyen (Pride & Prejudice). According to Blanchett, he is perhaps the darkest of these new men.

“What I find so interesting about this version of the Sheriff of Nottingham is that it’s the weak who are often the most evil, because they’re the most compromised,” she says.

As for the production, it was an ambitious feat, to say the least. The whole of Nottingham Village had to be built. Over 50 structures, including a mill with a working water wheel, as well as an orchard, were erected for the sole purpose of shooting.

Fans will no doubt appreciate the stellar performances, action sequences and wild shot of testosterone that will mark the death of Robin Hoods past. Take that, Kevin Costner.

Robin Hood releases in theaters May 14.

Interviews
Maleficent doubts her fitness as a mother. So did Angelina Jolie
894 views