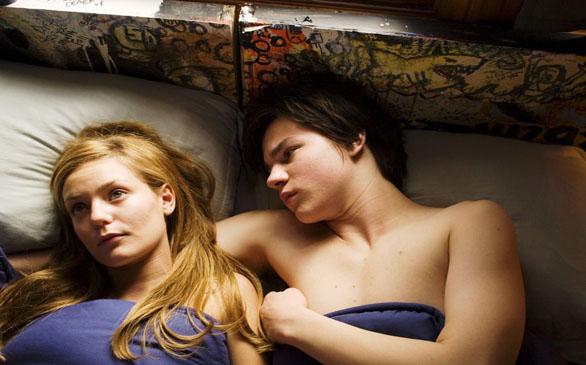 If you’ve ever wondered what it would be like to grow up on your own with no adult supervision, Happiness Runs shares a harsh taste of what it could be like. The film embraces the carefree hippie life like no other. It gives a brutal glimpse into drug and sexual experimentation, highlights a longing to escape the norm and invites freedom to overtake you.

Adam Sherman’s film is loosely based on true events of rebelling teens from the hippie commune where he grew up in the 1960s.

“The film is much like therapy: I am trying to come to terms with complex issues related to my unorthodox upbringing. In many ways my childhood was idyllic: I was creatively encouraged, free of constraints, while living in some of the most beautiful countryside in America,” says Sherman.

The story’s protagonist, Victor (Mark L. Young), breaks your heart as the fresh and all-too-realistically portrayed pushover. Young effectively plays the struggling teen finding his way. His character is extremely relatable and thankfully, avoids being in any way cliché.

While it’s hard to say if Victor’s love interest Becky (The Virgin Suicides’ Hanna Hall) is angelic or devilish, you glue your eyes to her in disbelief. She’s inexcusably promiscuous and naughty in every sense of the word, but you absolutely adore her nonetheless.

Jessie Plemons, Laura Peters and Shiloh Fernandez play Young and Hall’s unruly peers with great believability. While the film focuses on the teenagers, there are appearances by adults: Andie MacDowell portrays Victor’s mother, and Insley, the commune’s guru, is played by Rutger Hauer.

This is definitely one of those films that you can’t help but wonder if the creator of the film was on drugs. It’s executed brilliantly and filled with shocking moments. The originality and reality of Happiness Runs is what separates it from the rest.