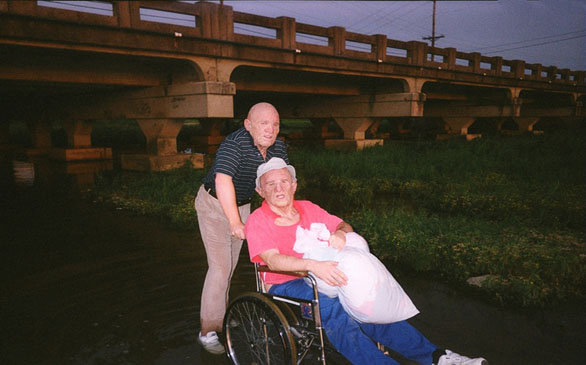 Trash Humpers is a must-see.
(Credit: Courtesy of Drag City)

Anybody familiar with the work of Harmony Korine is either a huge fan or is completely oblivious to why he’s one of the most critically hailed writer-directors of his generation. Korine rose to overnight success in the mid-1990s with his screenplay for the indie sleeper, Kids.

He penned a novel called A Crackup at the Race Riots and later unleashed such trailer trash classic films as Gummo (Chloë Sevigny) and Julien Donkey-Boy (Sevigny, Ewen Bremner and Werner Herzog). In 2007, he emerged yet again with the subtly charming, Mister Lonely (Diego Luna, Samantha Morton). However, it’s his latest work, Trash Humpers, which is perhaps his most socially relevant.

Now, make no mistakes: I don’t dare kid the readers of this review by trying to sell any of you on Korine’s traditional narrative storytelling genius. After all, if you’ve seen his movies, they are – shall we say – a bit off the beaten path. Trash Humpers follows that legacy by detailing the goings-on of a crew of sociopathic, well ... trash humpers.

They patrol their desolate neighborhood, raising a weird kind of hell. Korine (who also plays Hervé) films the trash humpers as they go from location to location, screeching and grunting while poking things and each other with sticks and crotches (America, lock up your daughters.).

Their unusual rituals, conversations and get-togethers take center stage like some abstract 21st century reimagining of Godard’s Bande à part. They have a bizarre, giggling interest in the most random sights and details, leaving the viewer to think, “WTF?” among other things.

Therein lies the beauty of Trash Humpers: An accident on the freeway is fascinating because of what we anticipate we’ll see; we don’t know if it’ll be blood or guts or just a startled driver gripping the steering wheel. Still, we stare, out of curiosity. Reality-based television has nearly replaced conventional scripted fair because it’s infinitely more engaging to watch John and Suzy Q. Public espouse the virtues of their own moral and ethical decline. Society even wastes valuable hours perusing YouTube stockpiles of viral videos, not for their stellar production value, but because we’re achingly voyeuristic creatures who get off on other people’s insanity. This is why Korine has the career he has, and why Trash Humpers, with all its stray oddities, moments of sexual fetishism and “WTF?” elements, is a bat-shit crazy must-see.