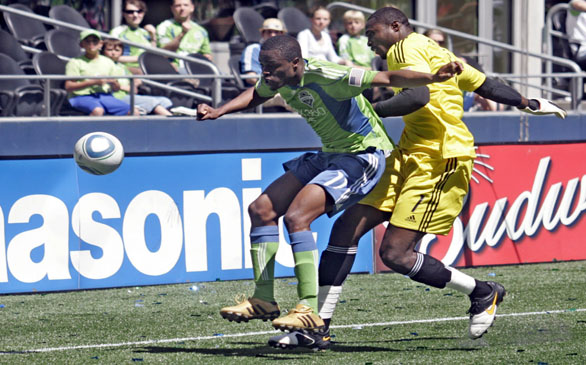 They have the best offense, defense and mark in the MLS: They are the Los Angeles Galaxy. With a recent two-game road trip, the Galaxy collected impressive wins to improve their unbeaten record to 7-0-1 (22 points) and remain atop of the Western Conference standings.

On May 8, the club traveled to Washington, squaring off against the Seattle Sounders in a pivotal affair for the hosts. However, as soon as Los Angeles gained a 1-0 edge at the 22nd minute when Jovan Kirovski fired a shot through the goalkeeper’s hands, the visitors never looked back. The Galaxy earned a dominating 4-0 result, led by Landon Donovan’s first season goal and three assists.

For this campaign thus far, Donovan leads the league in assists with a total of nine. Defenders Omar Gonzalez and Todd Dunivant scored the other goals for the team, who also played outstanding defensively. That resulted in goalkeeper Donovan Ricketts’ sixth shutout of the year, a league best as well.

As a group, the Galaxy have registered 15 offensive scores and surrendered only two. They are atop of the respective statistics in the MLS. Forward Edson Buddle, who did not score on the road trip, is the team and league’s leading scorer with nine.

Days before flying to the Pacific Northwest, the Galaxy visited the Colorado Rapids in Denver May 5; they came away with a 1-0 victory. While diving in the air, forward Alan Gordon headed the ball into the upper area of the net for his first goal of the season. Donovan received the assist off the pass into the box.

Los Angeles plays Saturday at the Home Depot Center, entertaining Toronto FC at 7:30 p.m. It is Donovan’s last match in a Galaxy uniform before heading to the World Cup in South Africa with the U.S. team.