Gun to A Sword Fight: Hunting for No. 1 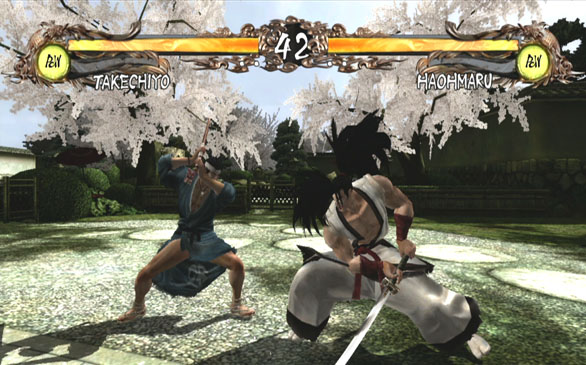 If there is any tangible divide between Japanese and American games, it has to fall into the weapon preference. Western games follow the Indiana Jones rule that swords are cool, but guns are far more efficient. You may get a laser sword here or there, but the real firepower comes in the wide range of death-dealing weapons.

Japanese games may have guns in them, but the overwhelming passion is definitely towards swords. Swords in Japanese games can come in many varieties – Asian or European, long or short, historical or fantastical – but they are always plentiful and far too powerful. Sometimes, they even put swords onto the guns, but these are still giant swords at heart. Since the games we are looking at this week come from Japan, it’s safe to say that you’re going to see quite a few swords.

To be fair, it is not so odd to see swords in a game called “Samurai Shodown Sen.” This Xbox 360 iteration of the classic Neo-Geo fighting franchise returns to the world of international swordsmen who occasionally cut each other’s heads off. Most of your favorite characters have returned to join a small group of new combatants, and the 3-D upgrade of this 2-D classic does keep the charm of most of the characters.

The gameplay, however, has received a bit of an overhaul. The “Street Fighter”-esque original has lost most of the high jumping and colorful projectiles in favor of a more “Soul Calibur”-style of combat. It does offer an interesting new approach to an old favorite, but purists are bound to complain that this is not the classic.

Judging this game completely on its own merits, though, it is a fun fighting title that is remarkably tough. Certain characters seem a bit stronger than others, but the range of weapons from Japanese short swords to European broadswords should offer something for gamers from any preference of fighting styles.

But then, the cowboy shows up. Yes, “Samurai Shodown Sen” actually has a character from America named Draco whose primary weapon is a shotgun. If this seems remarkably unfair, it means that you have realized that a character with a weapon that shoots in a straight line would dominate a fighting game where the fighters are locked on a two-dimensional plane. Players who try to sidestep may still wind up with a gut full of buckshot thanks to the shotgun’s spread, while players who try to get in close find that getting smacked with a shotgun seems to hurt as much as getting stabbed with a sword. Sure, he’s a mini-boss who is not available from the beginning, but it is a strange addition to a game with diminished projectiles.

“Monster Hunter Tri” for the Wii, on the other hand, makes a point of sticking to the strengths of its PSP predecessor. In this chapter of the man-on-monster, hack-and-slash franchise, we return to the world of cartoony animations, servile cats and ridiculously large bosses, but there is a definite step towards a single player-centric experience. While earlier titles seemed to toss you into a world with a bit of training and the general directive to take missions and kill monsters, “Tri” starts off far slower by involving the player in the lives of the characters as a way of teaching the essentials of the game.

In addition to the single-player quests to kill bigger and meaner monsters, “Tri” offers multiple other options to avid hunters. You can jump directly into a one-on-monster grudge match in the Arena, or meet up with (or beat up) other players by leaving the game’s central village in favor of a massive, hunter-filled city.

But, of course, then come the guns. Admittedly, in this world full of massive swords and other brutal melee weapons, the bow gun is actually not an easy weapon. First off, you actually have to spend some coin or collect several components to make any of the three elements of a bow gun. Once you have the weapon, you have to pay attention to elements like ammo and amazingly slow reloading. The bowgun is amazingly powerful, but for solo play, you’re putting your virtual life at risk if you don’t have a blade.

So, with swords and guns tied up, we see the war continues. Perhaps, some day, we can put the fighting behind us and join to virtually kill together in harmony.