“How to Succeed in Business Without Really Trying”: Justin Michael Wilcox talks behind the scenes. 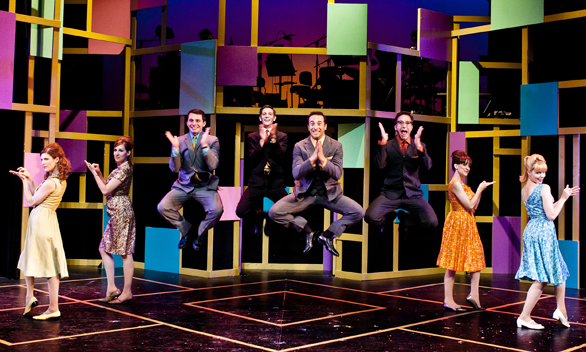 How have rehearsals been for this production?

This is my second show here at Reprise, and I am very blessed and happy to be back. Working on this production is a dream. Everyone in the cast is so wonderful and open. They all come to “play.” Our director, Marcia Milgrom Dodge, who has just recently been nominated for a Tony Award for directing the “Ragtime” revival on Broadway, is my kind of girl. She is an actor’s director – always letting us make big choices and seeing where they take us. We all trust each other. The show has a very short rehearsal period, and with so much material to learn, everyone comes prepared. We show up at rehearsal on a Tuesday, and by Sunday we have to run through the show for our production team. By the time I finish learning everything and feel that I have “My Show” down, it is closing night. I crash on my bed and say to myself, “What just happened” … but … I would do it over and over again.

What is your favorite part of the play?

I think my favorite part of the play is “I Believe in You.” All the guys are in the bathroom getting cleaned up. Finch comes in, and we are all mad at him because he is moving up the ranks so quickly. We say good luck to him and immediately we enter our minds and sing about how we want to stop him before we are all out of a job. The lyrics go, “ Stop that man. I gotta stop that man … COLD.” We are all at the sinks and when we say the word cold we turn on the cold water. Silly, I know, but I think it is so clever. It makes me chuckle every time we do it.

What’s it like being one of the younger actors in the cast?

I love it. What that means to me is there is so much more experience and knowledge that I have to tap into and absorb. When you have such seasoned actors on stage with such acting chops you can’t help but to become a better performer yourself. I am grateful to have this time with them.

What are the best parts about live theater?

I would say the “live” part of live theater. Anything can happen. This is not like film and TV where you get to cut and retake. Something happens and you just keep going. Someone drops a line, misses a cue or just falls down, nothing you can do but do your best to cover it, or make a joke about what happened. Audiences love stuff like this. They feel that they have been privy to something truly special. They saw something that no other audience got to see. Also, I LOVE the energy. There is nothing like feeling the whole audience with you moment to moment – breathing with you, laughing with you, crying with you. Each and every moment is special and different. It is exciting and frightening all at the same time, and I live for it!

Did you do theater in high school and college?

I did do theater in high school. I have always known that I wanted to be a performer. When I was cast in my first show in first grade, “Alphabet Soup,” as the letter “T,” I knew this was it! So, I was in all the shows in high school, and when it was time to decide what college to go to I was pretty anxious to just be in the real world. I was accepted to a few four-year colleges that had some nice programs and denied from some others, but my high school teacher told me about the American Musical and Dramatics Academy in New York City, and I had to audition. I got in, and something told me that was the place to be. So I went. It was the best thing for me at the time. I learned how to sing … really sing and dance. I learned about auditioning and what was expected of me in and out of the casting studio. I learned about me: who I was, how to sell myself. I learned things in the two years I spent there at school and in New York Ciy that people spend a lifetime trying to figure out. It was the best thing for me. I wouldn’t trade it for anything. I learned one of the biggest lessons in life, and I still carry it with me everywhere. “What you put in is what you get out.” I guess what I am trying to say is … We have one chance to be here. I want to change lives and shape others’ futures as well as my own. School was a big part of that for me. So I teach as well as perform. What is the use of having all this knowledge if you can’t share it? So I say it one more time: “What you put in is what you get out.”

“How to Succeed in Business Without Really Trying” runs May 11-23 at Freud Playhouse at UCLA, 405 Hilgard Ave., Westwood. For more information, visit reprise.org.