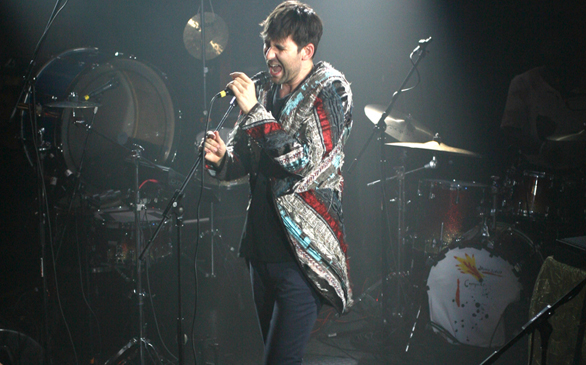 The Troubadour was absolutely packed. As the show began, I took a couple of shots from stage right and decided to make my way across the floor to get some other vantage points. After wading through the dense mass of Lidellians, I found solace at the base of the stairs leading up to the VIP area. This gave me a chance to enjoy the show without having to run around. And what a show it was.

If you’re familiar with Lidell, then you know he is a very versatile musician. So much so that he didn’t even use the band for a few songs, he just sang a part, recorded it, played it back, sang another part over that and repeated the process until he had a full song to sing the actual lyrics over.

At one point he just turned the microphone around to face the audience and let them sing the song. He did this as he crisscrossed his diverse song catalog; from the earlier electronic stuff, through the ’60s soul vibe of his more recent albums and even into some songs from a forthcoming album that seems to touch on the dance pop of late 1980s Jimmy Jam and Terry Lewis. Despite the various styles, the transition came very natural, and it was hard to tell who was having more fun, Lidell and the band or the mass of fans.