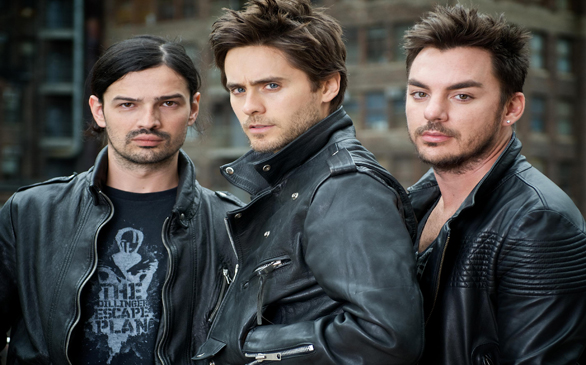 30 Seconds to Mars celebrate all “the kings and queens of promise” at the Greek May 15 as part of their Into the Wild tour, their first U.S. outing in three years.

“Our goal is to have people come to our show and have a night of total abandonment, uninhibited fun to forget about all the problems in their lives – to just come to this show and have a release,” proclaims guitarist Tomo Milicevic.

In addition to Milicevic, frontman Jared Leto and his percussionist brother Shannon Leto round out the trio, who seem to finally have come into their own to overcome the suppressing fame of their celebrity leader. It doesn’t hurt that they released This Is War, an incredibly fresh and popular third studio album.

“When we started making This Is War, we knew that we had an opportunity to reinvent ourselves, to show people another side,” recalls Milicevic. “This is definitely the best that we’ve done, and we’re really proud of it.”

Given the radio play of single “Kings and Queens” and its 67,000-unit first-week sales, that pride is quite justified. Jared described the album’s theme as a sort of ode to the American Dream during the release soiree held earlier this year at Hollywood’s Ricardo Montalbán Theatre. No doubt, that theme came from the songwriter’s darker perspective. This is War openly adopts a more ambient bass-heavy approach than albums past, but that approach seems to have worked for fans.

“People definitely know the record. We weren’t really sure how familiar people were going to be with the new songs,” says Milicevic of their live set. “But their response has been pretty overwhelming to be honest, and people seem to like the new songs a lot.”

“We are really interested in sharing every aspect of this experience with people,” continues Milicevic. “And communicating with the fans and actually listening to what they have to say.”

Under Leto’s creative direction, a documentary about the band entitled Artifact is also in the works – just another step in 30 Seconds to Mars’ quest to share their feelings with the world. As explained by Milicevic: “If people can listen to our music and feel something, then we’ve done our job.”

30 Seconds to Mars performs May 15 at the Greek Theatre. For more information, visit thirtysecondstomars.com.