The Expendables: Prove Having a Real Job Sucks 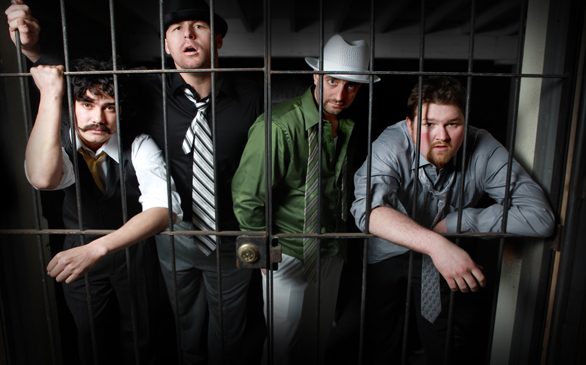 Reggae music. To the new and inexperienced listener, the first things that come to mind could be piña coladas, white sandy beaches and tropical weather mimicking a Corona commercial, with dirty dreadlocks and hippie lettuce to serve as the little umbrella on top that everyone adores.

However, the Expendables have done more in their 13-year tenure to dispel that myth. Well, except for the part about the beach scene … and the kush … In any case, this unique blend of reggae and metal laced with ska and punk will have you feeling so good, you will want to let loose and perhaps even share your bowl with another. It could be beneficial, however, to make sure the ganja’s packed, before you settle down and hear the backyard murmur. But enough with puns that only the super stoned will pick up on.

After playing a show in their hometown of Santa Cruz, Calif., the Expendables’ 4/20 holiday was described as “stoney.” Ryan DeMars on bass knows it’s always good to be home “because we travel so much and we work a lot. It’s nice to be in Santa Cruz and see our friends and family.”

Fans know that the frosty, purple nug often makes its presence well known at shows, and the band appreciates the loyalty. Geoff Weers on guitar and vocals thinks it’s awesome.

“I love going and playing a show with a lot of energy in the crowd,” he says. “It makes us play better. It makes us have a better time on stage. Our fans … we have a lot of kids, younger kids, and they like to get all their energy out by moshing and dancing or both. Smoke a lot of weed. It’s a good time.”

DeMars reminisces about their humble beginnings: “We all were in the music scene in Santa Cruz growing up, and we kind of came together and realized that playing music was way more fun than going to school and having a real job.”

“Raul, Geoff and I went to high school together,” he starts, “and we knew Ryan through mutual friends. We all kind of just played together, kind of crappy, and very young, but we got better and here we are today.”

Indeed, 13 years later, the Expendables just released their fifth full-length album, Prove It. The name comes from a movie, but Weers notes, “The theme for us is that we want to prove that we can put together a really awesome album where we can be ourselves. It’s for our fans, too, but it’s mainly for us to prove it to ourselves.”

Patterson talks about their collaborations on this album: “All those guys are our friends, so it’s always fun touring with people you really enjoying being around. We just basically have a crazy, wild, fun time.”

They’ve jammed with the different artists on stage and off before, so they knew whom to ask for what.

For example, Patterson continues, “With G. Love, we have a song that fit his style and asked him to come. He said for sure.”

And it seems that’s the way a lot of the collaborations happened: Just a bunch of good musicians jammin’ together, having a good time.

Weers thinks that the first five songs are “kick-ass,” but he describes himself as “that band member” who loves all of the songs. But, taken more seriously, the album has different kinds of tunes – crazy funk, some metal and everything in between.

Patterson clarifies: “We’re not really a band that needs to push a song for a radio hit or whatnot, we just throw our music out there and, hopefully, fans will like one song or all 17.”

And, since it’s hard not to think of the film of the same name, The Expendables, when asked about it, Weers says they were a little bummed that they weren’t asked to be in the movie.

“We were working out tremendously before, and we thought we’d get the part, but we didn’t. That would’ve been awesome. Expendables 2, we’ll be in it for sure.”

Prove It is currently available. The Expendables perform May 27 at Ventura Theatre and May 28 at Belly Up Tavern. For more information, visit theexpendables.net.