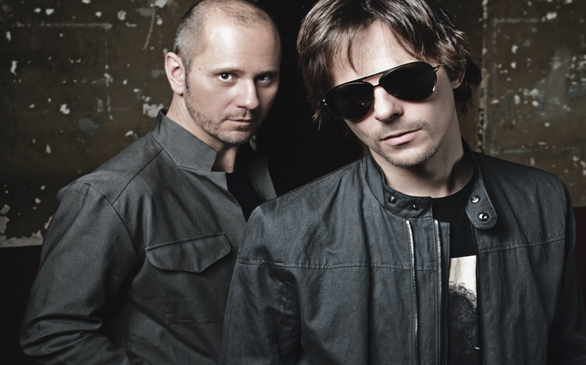 Get More! of Booka Shade at the Fonda May 27.
(Credit: Tim Dobrovolny)

Berlin-based electronic act Booka Shade have just released a new album called More! that contains a full 45-minute set of ultra-cool dance grooves. Arno Kammermeier, half of Booka Shade (Walter Merziger is the duo’s other half.), says the new music guides the listener through an entire evening and not just a trip to the dance floor. Kammermeier thinks of More! as being on a par with albums like Hot Chip’s The Warning or Massive Attack’s Blue Lines.

“The album takes you through every stage of the night out: the excitement before you go out, the party, the late night, a bit of paranoia, and then the sunny morning of a new day,” he says.

Electronic pioneers Yello join Booka Shade on “Divine,” and appearances from singers Chelonis R. Jones and Elsieanne Caplette mark the first time Kammermeier and Merziger have recorded with guest vocalists. Booka Shade bring their mod beats to paranoia-free life when they play the Fonda May 27.

After taking last year off and playing only Dallas in 2008, Ozzfest is going to be back on the road this summer. The six-stop tour begins with a show at the San Manuel Amphitheater in San Bernardino Aug. 14 and features main stage acts Ozzy Osbourne, Mötley Crüe, Rob Halford, Devil Driver and Nonpoint. Scheduled to appear on the second stage are Black Label Society, Drowning Pool, Kingdom of Sorrow, Goatwhore, Skeleton Witch, Saviours and Kataklysm.

The Ozzfest “Village of the Damned” is going to be a place where festivalgoers can shop, indulge in interactive activities and find additional entertainment. Tickets go on sale May 22. Ozzy’s 10th solo album, Scream, drops June 15, and he embarks on an 18-month world tour after the Ozzfest run.

North America’s largest electronic music experience, the Electric Daisy Carnival, returns to the L.A. Memorial Coliseum and Exposition Park in Downtown Friday, June 25, and Saturday, June 26. EDC features five themed areas of music, art and other festivities and is expanding this year to include additional carnival rides to keep you amused between sets by Groove Armada, Moby, Swedish House Mafia, Armin van Buuren, Deadmau5, Dirty South, Z-Trip, Jackbeats, Steve Aoki, MSTRKRFT and many others still to be announced. Tickets are on sale now at insomniac.com, and info on V.I.P. packages is going to be announced soon.

It’s a Cool Tour for As I Lay Dying

Metal Blade Records, Atticus Clothing and the Musician’s Institute College of Contemporary Music have teamed up to sponsor the first annual Cool Tour featuring As I Lay Dying as the headline act. The local stop for the Cool Tour is at the Hollywood Palladium July 31 and includes performances from Underoath, Between the Buried and Me, Cancer Bats, Blessthefall, the Acacia Strain, War of Ages and Architects. The new As I Lay Dying album, The Powerless Rise, drops this week.

Longtime L.A. favorites Rooney release a new album called Eureka June 8. Free downloads of the album’s first single, “I Don’t Wanna Lose You,” are available at Rooney-band.com, and you can hear more of Eureka when the band plays the Fonda June 19. The new one from the Chemical Brothers is called Further, and it drops June 8. The duo is playing festivals in Europe this summer, but they hit the States after that, including an Aug. 29 show at the Hollywood Bowl. Game drops his new Pharrell Williams-produced set, R.E.D. Album, June 15. Dr. Dre co-produces and raps on the album, and Justin Timberlake appears on a cut called “Ain’t No Doubt About It.” Fans of the early punk scene who are into collectibles are going to want to keep an eye out for the new Wendy O. Williams “throbblehead.” The seven-inch-tall figure shows the late Plasmatics singer as she looked in 1982 complete with her platinum blonde Mohawk hairdo. Find them at Aggronautix.com. The new one from L.A. all-girl band The Like, Release Me, drops June 15. While you’re waiting for the album you can catch the ladies during their Echo residency on May 17, 24 and 31.