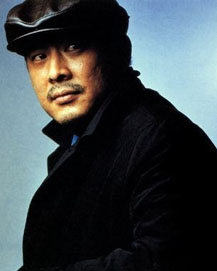 Though Park’s feature debut, 1999’s Joint Security Area, had become the biggest grossing film ever released in Korea, it had failed to reach an international audience. His 2002 follow-up, Sympathy for Mr. Vengeance, received some good reviews, but did not fare well even on his home turf.

"I had some small hope it might be shown in the non-competition part of the festival," says Park of Oldboy, speaking through an interpreter. "So I was extremely surprised when I was notified that it would be shown in competition."

But never in his wildest dreams, says the handsome, serious-looking Park, who looks at least a decade younger than his 41 years, did he expect to find himself vying for the festival’s top prize. The president of last year’s jury was Quentin Tarantino, who not only has great affection for twisty, artful and visceral vengeance tales, but has also been a high-profile and long-time champion of Asian cinema.

Tarantino mounted a campaign to give Oldboy the Palme d’Or, the festival's top prize. In the end, Tarantino was outvoted, and the Palme d’Or went to Michael Moore’s Fahrenheit 9/11. Oldboy received the Grand Jury prize, making it, in effect, the runner-up. More importantly, Tarantino praised the film and Park to anyone who would listen.

Park, who introduced Oldboy to North America at January’s Sundance Film Festival, credits Tarantino’s endorsement for Oldboy getting North American distribution. It was just as important to Park, however, that a filmmaker he considers a genius was so excited over his work.

"When we talked, he was describing every shot of the film," says Park. "He remembered little things about the framing or the editing that I had forgotten. He was so enthusiastic, I felt like he was talking about someone else’s work. He made me want to see my own film."

Park does not expect Oldboy – which is not only graphically violent but includes some startlingly original imagery – to find an audience as wide in North America as it did in South Korea, even though he says its story is more universal than his others.

Businessman Dae-su Oh (Choi Min-sik) skips his daughter’s birthday for a night on the town that does not end when he is arrested for public drunkenness. After his release he is kidnapped and thrown in what appears to be a low-rent hotel room with only a TV for companionship. He is kept there for 15 years with no explanation. Then he is released as mysteriously as he was grabbed.

He is obsessed with discovering who did this to him and why, but he soon discovers his imprisonment was a prelude to a more insidious game.

The morality of Oldboy has been a topic of much debate at film festivals, and more than one critic has accused it of being sadistic. Park, however, says he never intended to employ shock tactics simply to arouse his audience, "even though I have no objection to film being used in that fashion.

"With this film and Mr. Vengeance," he says, "my interest was in the emotion of rage, an emotion that is increasingly fueled by the harshness and the impersonal nature of the society we live in, while we are all expected to repress our anger, to sublimate it on sports, or entertainment, or, sometimes, in politics.

"Obviously, everything is exaggerated in Oldboy, because it is a fable, but what I’m really interested in is how people today deal with a guilty conscience. My characters aren’t evil, they are basically good people who find themselves unable to live with their darkest emotions, and suffer tragedy as a result."

Park earned a degree in philosophy at Seoul’s Sogang University but says his real interest was in the aesthetics of ideas, in how they were expressed. He thought he would be an art critic. He was especially interested in photography, but seeing Alfred Hitchcock’s Vertigo changed everything.

"I left that theater knowing that I had to at least try to make a movie, because it was the one way I could express the feelings I had about pictures and emotion and human behavior. It was Jimmy Stewart’s irrational obsession with a specific kind of beauty I responded to, and I knew I had to explore that."

The attention he has earned from Oldboy, coupled with Hollywood’s belated interest in Asian film and Asian filmmakers, has led to offers to make films in America – he was Sam Raimi’s original choice to helm the proposed remake of Evil Dead – but Park says no formal offer was made and that he was more interested in completing what he calls his revenge trilogy. (Sympathy for Mr. Vengeance is the first in the series.)

He has contributed to the upcoming Three ... Extremes, an omnibus of three short films by Asian directors. Park’s contribution, at 45 minutes, is the longest segment in the film he shares with Japan’s Takashi Miike and China’s Chan Fruit.

"I participated in this not because I want to be considered an ‘extreme’ filmmaker," says Park, "but to be part of something that showcased the current generation of Asian directors. Speaking for myself, I have no interest in attracting a cult. I want to make movies that will interest lots of different kinds of people, everywhere."