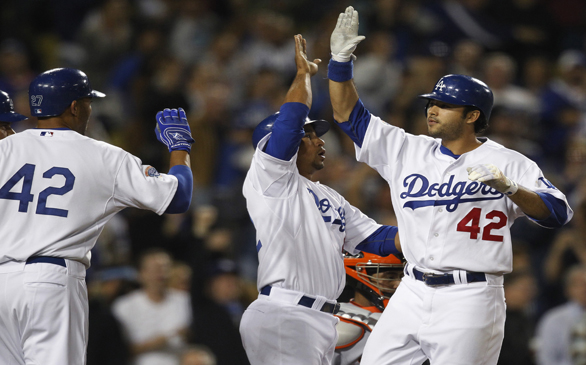 Ah, wasn’t that a time! Can you remember? It was the latter part of the Bush era, a nation restless for change found hope in a silly little slogan – “Yes, we can.” As an unlikely politician beat the odds and won his party’s primaries en route to the president, so an unlikely big league club from Southern California playing .500 ball defied expectations and won their division. There was magic in those days, a crazy belief that anything was possible.

Looking back from our wizened 2010 perspective, it’s hard not to feel some nostalgia. We might say that the sweeping changes hoped for in the political realm or, say, a World Series title in the baseball world were unrealistic fantasies, yet one can still remember fondly the excitement to be found in hope.

And so we arrive at the quandary of Dodger fans: how to find hope in the pits of despair. OK, that’s a little dramatic, but it is certainly fair to say there are very legitimate concerns.

With 20 percent of the season already completed, the Blue Crew finds itself sitting not-so-pretty in the cellar of the NL West, and it’s no accident. In short, the pitching stinks.

Not one of the three healthy confirmed starting pitchers, Hiroki Kuroda, Chad Billingsley or Clayton Kershaw, has shown consistency. Opening day starter Vicente Padilla is unavailable for at least a month due to injury. And the remaining two starting spots are occupied by … umm, that would be an unknown at the moment. Is it knuckleballer Charlie Haeger with a record of 0-4 and an ERA above eight? Would it be damaged goods out of the bullpen the likes of Jeff Weaver, Ramon Ortiz or some fresh-faced and untested innocent, a la Carlos Monasterios or John Ely?

At this point, it is anyone’s guess. Those who find this type of uncertainty unsettling, especially at this time of the season, would be advised to remember good ol’ 2008. That too was a hobbled club. Of course, the situation was different. Back then it was their offense that was the problem.

Point is, the Dodgers were not considered a formidable team, and through most of the season their record bore this out hovering around .500 for most of the year. And yet, down the stretch they found magic. Sparked by the arrival of Manny Ramirez and Casey Blake, the team brought a fiery energy to the field and were consequently able to run away with the division title. It wasn’t pretty you’ll remember. Even with Ramirez and Blake, there were dismal losing streaks as long as eight games. There were times when the young club hung their heads in gloom after another tough loss. But they also managed to find the mystical component so essential to winning clubs. They discovered a “chemistry” that allowed for the team to bond as a whole, to pull for one another and bring about successful results on the field.

In a sense, the fantastic start of the 2009 season could be seen as a continuation of that melded spirit formulated in 2008. The dynamic optimism, which propelled the team last year, began to decline when it was revealed that the organization was unable or unwilling to spend the money to patch its weak spots in the starting rotation. And regrettably that continues to be the case.

Yet, if 2008 teaches us anything, it is that chemistry can be reignited from the most unexpected sources. There is a silver lining to the Dodgers’ mediocre start this year. Ramirez seems to be holding up even after a strain in his hamstring. Andre Ethier is leading the league in batting average and homeruns and closer Jonathan Broxton is still hitting 100 mph on the radar gun. As for the competition, the Dodgers have done surprisingly well against teams in their own division, going 6-3 in this young season.

Manager Joe Torre, ever the optimist, points out, “We’ve held up well in our division, and if we continue to do that maybe we can get on a little roll.”

Yet, also the realist, he adds, “We have to do it ourselves. Nobody is going to do us any favors.”