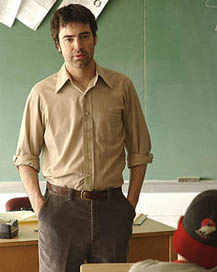 A melancholy void and silent friction is what the film Winter Solstice conveys in its depiction of a father and his two sons struggling to conquer past familial trauma. What the film probably intended, more or less, was to achieve more emotional depth than it manages to actually produce on the screen. The product feels like an afterthought to a grander idea of the film’s aim to show the dynamic emotional struggle of a family coping with loss.

The omnipresence of subtlety in both dialogue and action, as guided by Josh Sternfeld’s original script, pushes the characters into a monotonous realm and detaches the viewer from any engagement with the characters’ plights, resulting in a loss of much-needed emotion. In other words, it’s difficult to be compelled by these somewhat awkward characters fumbling with apathy.

Nevertheless, Anthony LaPaglia gives a solid performance as Jim Winters, the father struggling to engage his two teenage sons and to himself adjust back to normality.

Mark Webber, as Jim’s son Pete Winters, gives the strongest performance as the indifferent high school student. His character is not over mired with subtle loathing but, instead, wavers very effectively between indifference, teenage angst and juvenile behavior. This is possibly to the character detriment of his one-dimensional sulking brother Gabe, played by Aaron Stanford.

It is in the film’s culmination that we discover from what the family is recovering and that there is a reason for the somber way that they deal with one another. Unfortunately, though, the dramatic heart of the film exposes itself a little too late.