You Could Be A Criminal and Not Even Know It: Laws Being Broken By Students 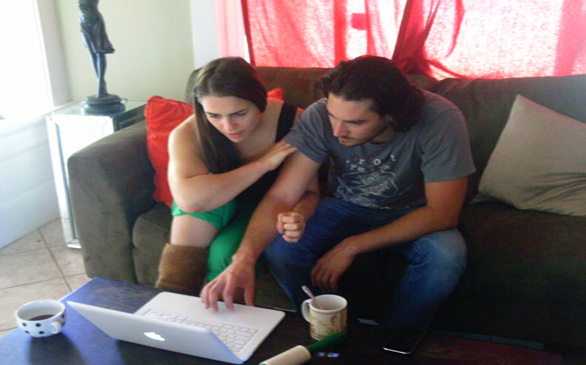 Buying or selling designer clothing knockoffs online could get you in trouble.
(Credit: Ebony March)

Micah loves to hang out with friends all over Los Angeles. As a member of the GLBT community, his circle is a mishmash of 20- and 30-somethings who enjoy art, music, fashion, politics and humor as much as he.

One evening, to unwind, Micah and his crew took to their favorite watering hole in the West Hollywood area commonly known as “Boys Town.” They knocked back shots, had tons of food and drew an equal amount of attention from other patrons.

The group’s waiter came over to their table to check up on them and to see if they needed anything else. Micah flirted with the server – a young African-American man. When asked if they wanted dessert, Micah replied, “N***a please! I’m done.” His group giggled, some, uncomfortable, others amused. The server walked away, and the fun continued for the celebrating friends. That is, until a sheriff's deputy later descended upon the group, questioning Micah about his politically incorrect choice of words.

West Hollywood, like a number of cities across the United States, has adopted strict hate-crime laws. Any sexually or racially derisive epithets can land the offender in serious hot water, as Micah soon discovered.

“My comment was in bad taste. I can admit that,” he says. “I didn’t think it was a crime, though.”

Micah received a stern warning from the officer – evading jail time or a formal charge – after the waiter decided not to pursue the matter further.

“I just couldn’t believe he called the cops on me,” he explains. “I say stuff like that to my friends all the time.”

Micah apologized to the waiter for his words, left a sizeable tip and has yet to return to the establishment out of fear of retaliation.

Students across Los Angeles are finding that the world in which they live is becoming less and less tolerant of certain behaviors. Although liberal attitudes prevail in most areas, there are still a number of activities that 18- to 25-year-old men and women should be aware of, to avoid serious embarrassment and, in some cases, prosecution.

A one-time Arizona State student found herself in a heap of trouble when the estranged wife of her older boyfriend decided to file for divorce. Not only did the wife name the student in her claim, but since the bulk of the affair was spent at the couple’s home in Arizona (a state that held strict anti-adultery laws at the time of the affair), the wife and her divorce attorney lobbied strongly to have the girl and her soon-to-be-ex charged with that infraction, too. Embarrassed by the scandal, the young woman transferred out of state to UC Irvine to complete her education.

But perhaps one of the more prevalent crimes being carried out is that of copyright infringement and piracy. Sure, most people have been educated about the dangers of sharing downloaded music (cough ... Napster) or making illegal DVDs of studio films. But there are still a number of similar practices that may result in fines (and in certain cases, litigation) for those who partake.

For example, buying or selling designer clothing knockoffs online with retailers such as eBay can get you kicked off the service and even turned over to the U.S. Customs department. Those found guilty can possibly look forward to hefty fines and, in some cases, jail time. Scalping tickets is another common activity for young men and women looking to make a fast buck.

“Don’t do it,” warns Kimberley Rodriguez.

The high school junior, who hopes to attend Loyola Marymount in a couple of years, speaks from experience. She and her father were detained when they were caught trying to unload an extra Hannah Montana ticket.

“My sister got sick and couldn’t go [to the concert], and we were the only Hannah Montana fans in our family,” she says. “So my dad tried to sell our extra ticket at the venue place to make back some of the money. So this lady offered him a bunch of money, which, of course, he took. Then she arrested him.”

She screams and enjoys a good laugh.

For Rodriguez, being detained ended well, with her mother coming to the family’s rescue and her father having to pay a small fine. He was also charged with a misdemeanor. Still, Rodriguez learned her lesson.

Campus News
Colleges campuses are trying to reopen in the fall. The main source of opposition? The faculty
73 views