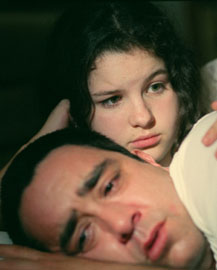 The latest film from director Todd Solondz, Palindromes, continues the offbeat career of a filmmaker who seems almost terrified of success.

After making one film that has been all but erased from his resume, Solondz made a proper debut with cult hit Welcome to the Dollhouse. He then took a big step forward with the complex ensemble dramedy Happiness. But just when he was on the brink of breaking out, Solondz went in the other direction.

Instead of becoming more accessible or stimulating, his films have become more specialized. There’s nothing wrong with this as a turn, but unfortunately the work isn’t particularly distinguished.

Palindromes is his slightest work yet, primarily interesting because of a casting gimmick.

The film’s lead character, a young girl named Aviva, is played by eight different performers: four girls aged 13 to 14, a 12-year-old boy (who speaks no dialogue in his brief scenes), a 6-year-old girl and two grown women. The film is broken into nine chapters following Aviva’s journey away from one oppressive existence into another. Each of the actors tackles one segment and then returns for an epilogue.

The rotating actors help keep the film interesting despite the overly simple storyline, but the gimmick also prevents the development of Aviva as a fully formed character. Solondz places her in a series of horrible situations hoping to gain audience sympathy, but it’s difficult to feel for a character that is presented in such an abstract fashion.

The casting gimmick also makes the film feel more episodic than cohesive. Even though there is a clearly defined structure (as the title would suggest) the film tends to lack a narrative thrust. Supporting characters are marginal at best, adding to the film’s overall shallow feeling.

Palindromes is the type of film that will "divide" audiences, but will enough people turn out to make for a worthwhile argument? This reviewer doubts it.

The film is likely to appeal primarily to Solondz cultists, and probably less than usual, which means a very small audience indeed.