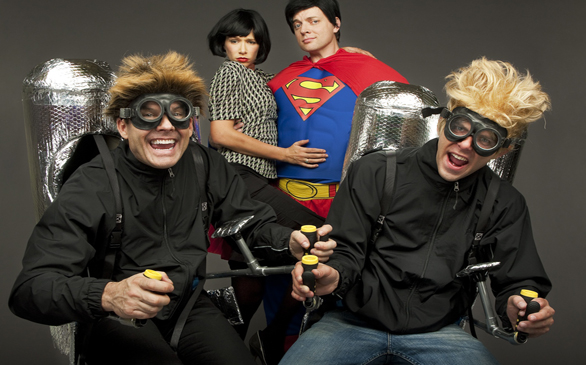 I sit barely two feet from a small, black stage and actors are screaming vulgarities, chairs are flying and the White Stripes are really screwing up the jingle for a Folgers coffee commercial (something to the likes of “I want to drip, drip, drip in your mouth”).

So, it’s not the real White Stripes, but I like these characters better. If there is a word that would fit the definition of “God Almighty, this is hella hilarious,” then that would be the perfect description for the new Groundlings show.

Somehow the more than 15 or so comedy sketches shown by the cast seem to have nothing to do with an airport, but it’s filled with awkward moments and witty comedic timing, like when two Swedish scientists plucked straight out of an IKEA cause one of the actresses to break character and chuckle a bit. A favorite sketch that shows the true skill of the actors’ improv techniques involves poking fun at various audience members in an effort to “retape” audience reactions to a Hannah Montana concert. At one point, they start hitting on a guy’s girlfriend while panning in on the boyfriend’s reaction. The row in front of the couple was dubbed the cast of a new CW drama, and rightly so since the whole row was surprisingly hot, young and über trendy.

I have to give it to the guy who was able to quickly think up that joke, and expand on it to include character flaws. In between sketches, as the room goes dark while stage hands stealthily prepare the stage, a house band plays some rocking ’80s tunes that altogether hype up the energy before the start of each sketch, which include overzealous census takers, a show-hogging magician’s assistant, tweens talking about the recession and other creative bits that are pulled off brilliantly by notable actors, including Michaela Watkins from “SNL” and Mikey Day from MTV’s “Wild ’N Out.”